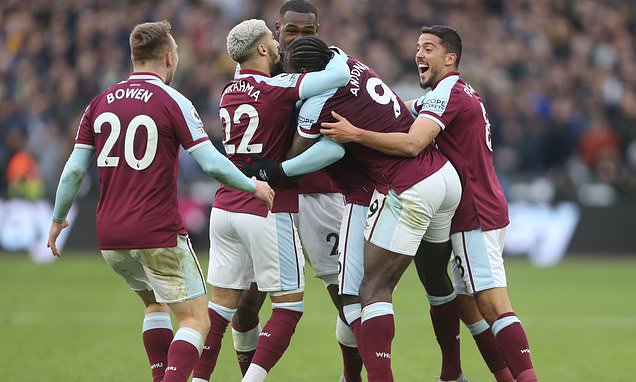 It was a terrific game of football at London Stadium. West Ham were too passive in the first half by showing too much respect for Chelsea, but the second half was a different story. For all the visitors’ possession, they could not hurt David Moyes’s team.

The big question is whether the West Ham board will now back their manager in January in an effort to make make the club’s Champions League dream a reality. It has been a while since an outsider has finished in the Premier League top four, but there is no doubt the Hammers are good enough to achieve that this season — if they get a couple of reinforcements.

Injuries to Angelo Ogbonna and now Kurt Zouma will leave a massive hole in the centre of their defence, while they need another option up front in addition to Michail Antonio. To be fair to chairman David Sullivan, he brought in Jesse Lingard on loan midway through last season and the impact of that helped West Ham qualify for Europe.

The owners took a lot of flak moving the club from Upton Park to the Olympic Stadium, which they did because they believed it was the only way to compete with the elite. Now the chance is there to finish in the top four, it would be odd not to be active in the transfer market next month when they have a real live prospect.


For the opening 45 minutes, West Ham looked like a side struggling to adapt to changing their system to a back-three. The change disrupted what had made the players successful this season.

There was a lack of concentration for Chelsea’s opening goal from a corner but the mistake by Chelsea goalkeeper Edouard Mendy for West Ham’s equalising penalty was massive because it gave everyone a lift, even though Chelsea regained the lead before half-time.

They were more like the West Ham we know in the second half. Jarrod Bowen was a pest to the Chelsea defence and thoroughly deserved his goal to make it 2-2.

The winner from Arthur Masuaku was bizarre, an intended cross, and while Chelsea can feel hard done by, West Ham’s will feel justified in taking all the points because of their second-half endeavour.

I wouldn’t over-react if I was a Chelsea fan. It was a rare bad day at the office for Mendy, and Romelu Lukaku is not at his sharpest yet following injury.

But you have to remember that Liverpool lost by the same scoreline at West Ham and they bounced back impressively.

Chelsea have plenty of credit in the bank, from Mendy to Thomas Tuchel in the dug-out, so I would put this down as a huge boost to West Ham rather than any crisis at Stamford Bridge.