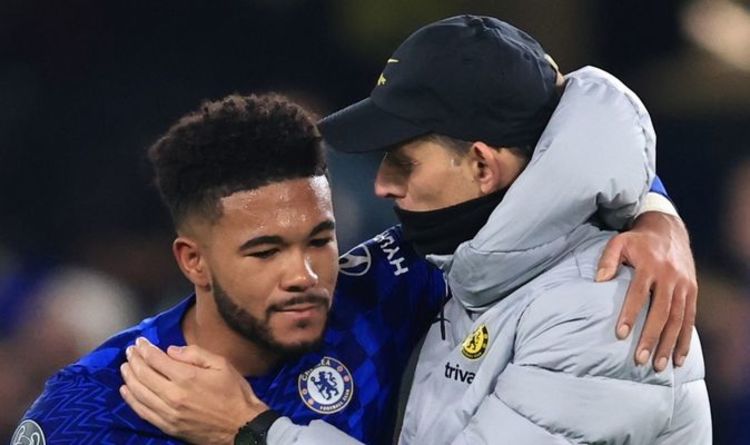 Chelsea will welcome back Reece James this weekend against West Ham (Image: GETTY)

Chelsea boss Thomas Tuchel has confirmed the Blues will welcome back Jorginho, Reece James and Timo Werner when they travel to West Ham this weekend. The European champions were without the trio in midweek when they secured a valuable 2-1 win on the road at Watford courtesy of goals from Mason Mount and Hakim Ziyech.

With the Premier League title race really starting to hot up now heading into the jam-packed festive fixture schedule, Tuchel and his squad will know they cannot afford to drop any points with Manchester City and Liverpool hot on their tail.

But West Ham have already shown they're capable of taking points off the top sides after handing Liverpool their only defeat of the Premier League campaign so far before the international break.

There is good news for Chelsea though in the form that regular starters James and Jorginho will be back - while Werner will provide another option in attack.

Tuchel said: "It is massive because Reece is the specialist on the side and Jorgi is the guy left from [Mateo] Kova[cic], N’Golo [Kante] and him.

Trevoh Chalobah is set for a spell on the sidelines with Chelsea (Image: GETTY)

"From the three whose shoulders we put the central role over a very long period now. I am absolutely happy that Ruben [Loftus-Cheek] steps in and the way he does it but yeah, we are happy that Jorgi is back in

"training and we can’t wait for Kova and N’G to come back. It is a very important part of the season and our games. The midfield role is where we miss the experience and the leadership qualities of the guys who are out. It is good that they are back.

"Listen, we will never complain because we are here to find solutions. If we miss players, other players will play. They have contracts here because they deserve. This is what we do.

Chelsea do still have a number of stars on their injury list though with as many as four players scheduled to miss this weekend's trip across London.

Tuchel added: “Almost need a list! We did not train with Mateo Kovacic, N’Golo, Ben Chilwell and Trevoh Chalobah. They are all out for tomorrow. Everyone else is available. Every player (out) is a player too much. It is a lot of midfield players.

"It has been many days without Kova, we miss him.Of course, Ben Chilwell is a long one. For Trevoh we need more examinations to see how bad it is.”

Chalobah is the latest Chelsea player to pick up an injury after he limped off at Vicarage Road on Wednesday with a hamstring problem after such a promising start to his excellent breakthrough campaign.

The early information regarding the scans on his injury are positive and there is now hope he will not spend as long on the sidelines as initially feared.

Meanwhile, Chilwell seems unlikely to return to action again this season although Chelsea are taking their time to decide whether he will need surgery.

The left-back was in sublime goalscoring form before the cruel blow against Juventus.

Saul Niguez could now provide cover at left-wing-back with Marcos Alonso, with many wondering where his Chelsea career goes next.

The Atletico Madrid loanee was hooked at half-time once again by Tuchel after starting at Watford.

He has now been subbed after 45 minutes in each of his two Premier League starts.