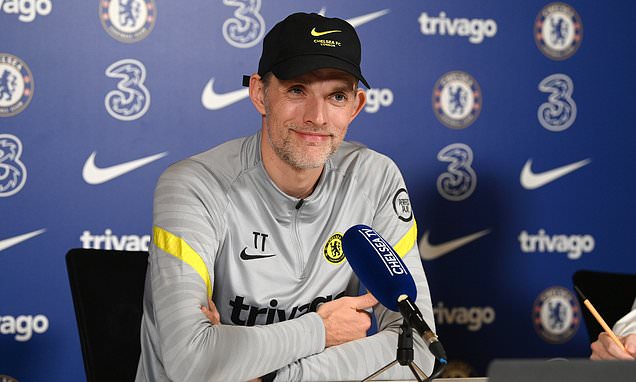 Tuchel's Premier League leaders take on West Ham on Saturday lunchtime at the London Stadium as they look to maintain their unbeaten run.

Rangnick, meanwhile, conducted his first press conference in charge of Utd on Friday and his appointment came as a surprise, given he rebuffed Chelsea's offer of a four-month stay after they sacked Frank Lampard in January.

Rangnick says he had an offer in February from the Blues, but with that coming after Tuchel's appointment, the Chelsea coach joked that Rangnick was contacted after his first game - a goalless draw against Wolves.


'Maybe after our draw against Wolverhampton! Maybe after that they said he didn't know what he was doing,' Tuchel said at his pre-match press conference.

He must have the dates wrong, hopefully! It's a nice job to have in world football at Chelsea, if you get the phone call you should be aware that you're not the only one getting the phone call.'

Tuchel added that he has not spoken to Rangnick since his appointment, insisting his compatriot does not need any adivce.

Meanwhile, the Chelsea boss revealed Romelu Lukaku is 'eager to start' following his time out of action through injury.

Asked if he will start the Belgian, Tuchel said: 'I will not tell you. We want the opponents to know very later. He's in training, he wants to start and he's eager to start. How difficult is it for Romelu after injury to reach his top-level?

'We should always try to reach our top level. We need to focus on not allowing too many big chances. It's a mental game to hang in there and take the chances and be clinical.