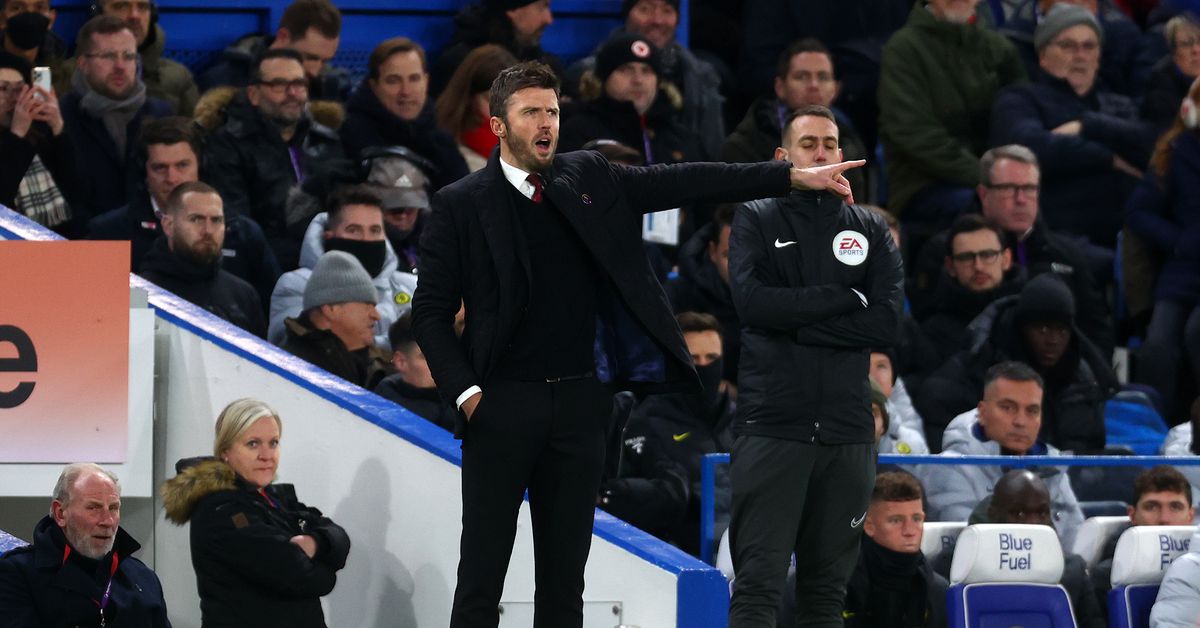 The big story entering the match was Carrick dropping Cristiano Ronaldo to the bench. And what do you know? Right from the start United were defending with all 10 outfield players moving around like a unit.

It still wasn’t good, it still wasn’t cohesive, but everyone was moving together and doing their job. No one was having to do the job of two players and there wasn’t a blatant hole every time the ball went to a particular area. It may not have lead to United winning the ball back, but if often stopped Chelsea from easily advancing the ball. It also had the bonus of being fluid, so when a player did move into someone else’s spot, everyone was able to shift over and cover accordingly.

(This is speed up but watch as Sancho keeps moving across as Rashford covers Bruno, Fred covers Rashford, and eventually Sancho covers Fred. Then they shift back.)

This cohesion isn’t that surprising given that nine of the 10 outfield players were with this team last season (and eight of 10 the last two seasons) when United were a well organized team, especially in the big games.

Carrick set the team up in a 4-4-2 diamond but it was far more complex than that. Scott McTominay was less playing right central midfield and more playing “man-mark Marcos Alonso” which often saw him dropping to RCB in a back three, with Jadon Sancho providing cover in midfield so United didn’t lose a body there, effectively turning the formation into a 5-3-2.

It wasn’t always as the right center back though. Sometimes McTominay would drop in outside of Wan-Bissaka if that’s where Alonso was lurking.

The plan worked really well in that it kept Alonso quiet. It also left United open at times because of how heavily it relied on the positionally weak McTominay. United seemed to randomly shift between McTominay being in a back three and him playing midfield without any rhyme or reason.

Here he is on a Chelsea goal kick lined up as the right center back, despite Alonso being much deeper up the pitch.

Following the goal kick McTominay was in midfield, despite Alonso being much more advanced. He doesn’t seem to realize this until it’s far too late and all he could do is point at Alonso even though there’s no one there who can cover him.

That close call may get you to reset and get back into position, but just over 30 seconds later here’s McTominay once again far up the pitch as a midfielder.

It’s clear McTominay was told his assignment was to man-mark Alsono and he understood that, but he seemed to get confused when Alonso wasn’t around. Early on in the match McTominay has fallen into the back three, with Wan-Bissaka - now essentially playing wingback - picking up Marcos Alonso wide.

In between Wan-Bissaka and McTominay is Callum Hudson-Odoi, but the ever positionally astute never seems to realize that Hudson-Odoi is there, or that he might be responsible for him.

To make matters worse, he never really makes an effort to get back, and when he’s beat he never thinks - or never seems to be aware - that there’s a late runner in the middle that should be picked up.

Alonso was withdrawn after 78 minutes, which only went on to increase the confusion over McTominay’s role for the final 12 minutes. A miscommunication between McTominay, Wan-Bissaka, and Jesse Lingard (with McTominay picking up the interior Romelu Lukaku and leaving the wide defender for Wan-Bissaka unlike how they’d been playing all game) left Antonio Rudiger with a chance to win it with virtually the last kick of the game.

United for the last three years has been a team of give and take. Matic is the best defensive midfielder, but lacks mobility. Pogba adds dynamism to the attack, but lacks defensively. Fred and McTominay bring energy to midfield, but lack passing ability etc etc and so on and so forth. The same thing was true with this formation. What United added defensively they very much took away from their attack.

For better or worse, Bruno Fernandes has essentially been United’s sole creator over the past two and a half seasons. For him to be effective at creating, you need to get him on the ball near the opposing team’s box.

Since Fred, McTominay, and Aaron Wan-Bissaka aren’t exactly progressive with the ball (especially the latter two) what tends to happen even when United are in a 4-2-3-1 is Fernandes drops deeper to get the ball.

That’s good in that it gets Bruno on the ball, but now instead of having four players to progress the ball to there’s only three. And if Sancho isn’t on the pitch, Rashford, Greenwood, Martial, Ronaldo (the 2021 version), and Cavani aren’t the most creative type - with most of them’s first instinct simply being “cut in and shoot.” This is one of the reasons why Paul Pogba played much more on the left wing last season.

Bruno dropping deep(er) to get on the ball has been happening more and more this season, especially over the last seven games. Just look at where his touches are coming from compared to last season.

With a diamond, you’re already (naturally) dropping the number of attacking players high up the pitch from four to three. Now add in that United’s three best ball progressers (Maguire, Shaw, Pogba) were all unavailable leaving United with the insanely non-progressive back seven of Alex Telles, Eric Bailly, Victor Lindelof, Aaron Wan-Bissaka, Nemanja Matic, Fred, and Scott McTominay. (Victor Lindelof isn’t even that progressive and he’s the best of the bunch. Yikes).

That’s not a team that’s going to move the ball up the pitch and lead to United’s average positions - based on where they touched the ball - looking like this.

It’s not a surprise that Bruno was dropping deeper to get on the ball, but when you do that in a diamond, now you only have two options higher up the pitch.

That’s not exactly a lot to work with and as a result Bruno only had one progressive pass - the (joint) fewest he’s had in a United shirt (he also had just one in his other match against Tuchel’s Chelsea).

This begs the question, what exactly was United’s plan going forward? No one in the back four are progressive options and Matic, Fred, and McTominay are not a midfield that are going to keep possession and dictate a game. You do have the Lindelof long ball to Rashford running in behind option, but as that was essentially United’s only option, Chelsea were easily able to make sure that that was simply not on the table.

With the back four not being great on the ball, Carrick did have David de Gea take United’s goal kicks long - a noticeable change from the Ole Gunnar Solskjaer era where United were always trying to play out from the back seemingly no matter what.

It didn’t take long though to see why Solskjaer preferred it that way. Kicking long may alleviate the immediate pressure in front of goal, but with Fernandes, Rashford, and Sancho your three men up top (and Fred your furthest forward midfielder), United didn’t have anyone that could contest much less win an aerial duel.

Here, Rashford doesn’t even attempt to contest this header and just like that Chelsea are right back on the attack running at United’s backline.

Even when United did manage to get it forward to their dangerous players, they left them devoid of any options in the middle.

This was all about defending and holding on. A point at Stamford Bridge is a good result and you definitely get at least a point if you don’t concede a goal. Just defend at all costs. It wasn’t too dissimilar from the 1-0 win United scored over City in the second leg of the League Cup semifinal in 2020 - a match United had no business winning.

It’d be unfair to say Chelsea played United off the pitch given that somewhere between 95 and 99 percent of United’s energy was devoted to not letting Chelsea do what they want to do, and they actually did a good job at that. But United’s plan was never realistically going to get them three points either. Three shots over 90 minutes, two of them thanks to Chelsea mistakes. United had more shots (5) in the disaster performance against City.

Somehow, at the end of the day it felt like points dropped simply because Jorginho absolutely gifted United a goal that was in no way coming.

United miraculously had a lead that they only lost when Aaron Wan-Bissaka was the victim of a very unlucky penalty decision (it was one of those where what else is AWB supposed to do? There wa