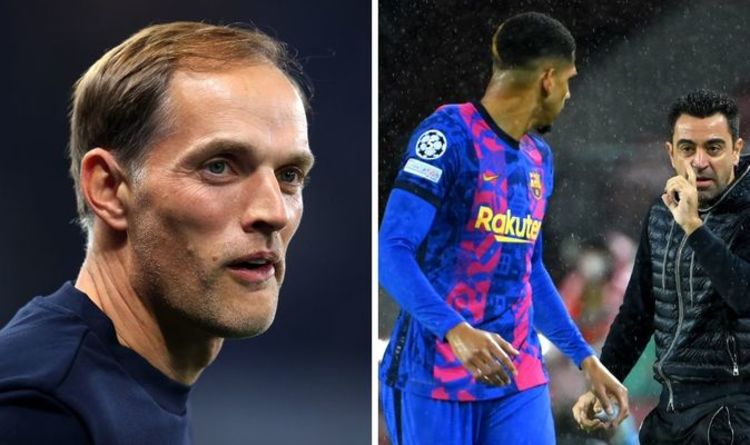 Chelsea boss Thomas Tuchel wants to sign Barcelona defender Ronald Araujo as he believes his physical characteristics make him the perfect fit for his three-man defence, reports in Spain claim. The 22-year-old has become a dependable figure in Catalonia after breaking into the first-team picture under Ronald Koeman last season.

Now Araujo - who has already been capped five times by Uruguay - is a regular at the back for Xavi and deemed key to Barca's rebuild.

Barcelona have had their fair share of struggles in defence in recent times but Araujo is considered to be one of few positives as Xavi prepares to build from scratch.

There are high hopes for the youngster at the club, having already proven he can play at the highest level with ease in his opening 40 Barcelona appearances.

Yet with his contract up at the end of next season, there are already concerns that Barcelona may face a fight to keep their former B team player.

The board are yet to reach an agreement with Araujo over a new deal and several other clubs are now starting to take note of the situation.

One of which is Chelsea and according to Spanish publication SPORT, Tuchel would like to bring the South American defender to Stamford Bridge.

It's claimed the German is understood to be impressed by Araujo's physical qualities and ability to dominate strikers at such a young age.

Chelsea are facing the prospect of losing several high-profile defenders at the end of the season, permitting the current situation does not change.

Antonio Rudiger, Andreas Christensen, Thiago Silva and Cesar Azpilicueta are all out of contract as things stand.

Rudiger looks the most likely to depart with the Blues thought to be miles apart from his salary expectations.

There is still hope that Christensen and Azpilicueta will sign new contracts while a decision has not yet been made on Silva's future.

Barcelona are reportedly keen on signing Christensen, should he leave Chelsea.

The Dane's representatives recently revealed they had not heard from Chelsea regarding a new contract for a considerable amount of time.

Chelsea remain relaxed about the situation and are already planning ahead in case they're unable to find an agreement.

Christensen is not the only Chelsea star of interest to Barca boss Xavi if Spanish reports are to be believed.

It was recently claimed that Christian Pulisic, Hakim Ziyech, and Callum Hudson-Odoi are all of interest to Barca ahead of the January window.

Xavi is looking to add more quality out wide and loan deals for the trio were all said to be under consideration - although their game time has improved as of late.