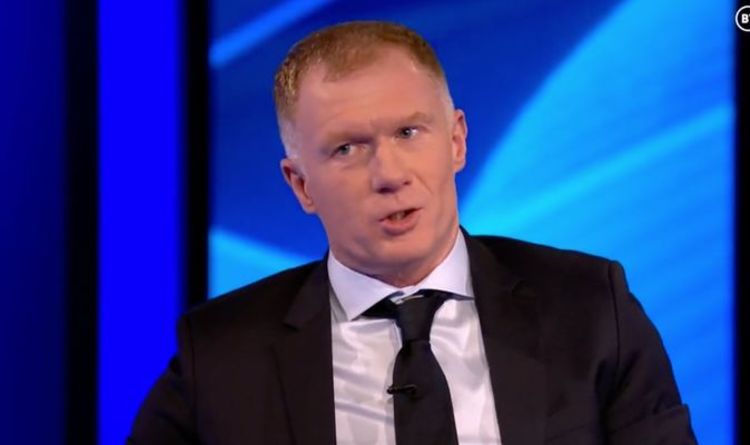 Paul Scholes believes Chelsea can compete for the Premier League title this season, but keeping Romelu Lukaku fit and firing is critical to their chances of staying in the race. The Manchester United legend has altered his prediction after initially claiming it would be a two-team battle between Liverpool and Manchester City.

Chelsea were held to a 1-1 draw against the Red Devils on Sunday at Stamford Bridge which keeps them a point clear of Man City at the summit of the Premier League after 13 games.

Jorginho’s error handed Jadon Sancho the chance to score his first league goal since his £73million move from Borussia Dortmund.

But the Italy international redeemed himself from the penalty spot after Aaron Wan-Bissaka fouled Thiago Silva inside the penalty area, meaning both sides shared the spoils.

Lukaku returned to action against his former club after spending four weeks sidelined with an ankle injury, while Timo Werner has only just regained full fitness following a hamstring problem.

In that time, Chelsea have remained unbeaten without their £97.5m signing, and even thrashed Juventus 4-0 at Stamford Bridge while the 28-year-old watched from the stands a week ago.

JUST IN: Chelsea could be dealt title blow due to Club World Cup

But Scholes, speaking after the game on Sunday, believes the target man — who has four goals in 11 appearances this season — will be crucial to Chelsea’s chances of domestic silverware.

“I think Lukaku is a big difference to him [Tuchel],” Scholes told Premier League Productions.

“They need to get him fit, if he can play the rest of the games this season, they are going to have a great chance.”

It marks a surprising shift from the 45-year-old’s comments a month ago in the wake of United’s humiliating 5-0 defeat at the hands of Liverpool.

“I really didn’t fancy Chelsea at the start of the season. I’m not sure why looking [back] now,” he added.

“They are well-drilled, they are confident, everyone knows what they are doing.”

Tuchel’s side are facing a gruelling run of three consecutive away games which could leave the Blues stretched, forcing the German into some squad rotation.

That begins with a midweek trip to Vicarage Road on Wednesday to face Claudio Ranieri’s Watford as they aim to maintain their lead at the top of the table.

Then they face West Ham at the London Stadium on Saturday for a feisty London derby and travel to Russia for their return fixture against Zenit St Petersburg in the Champions League.