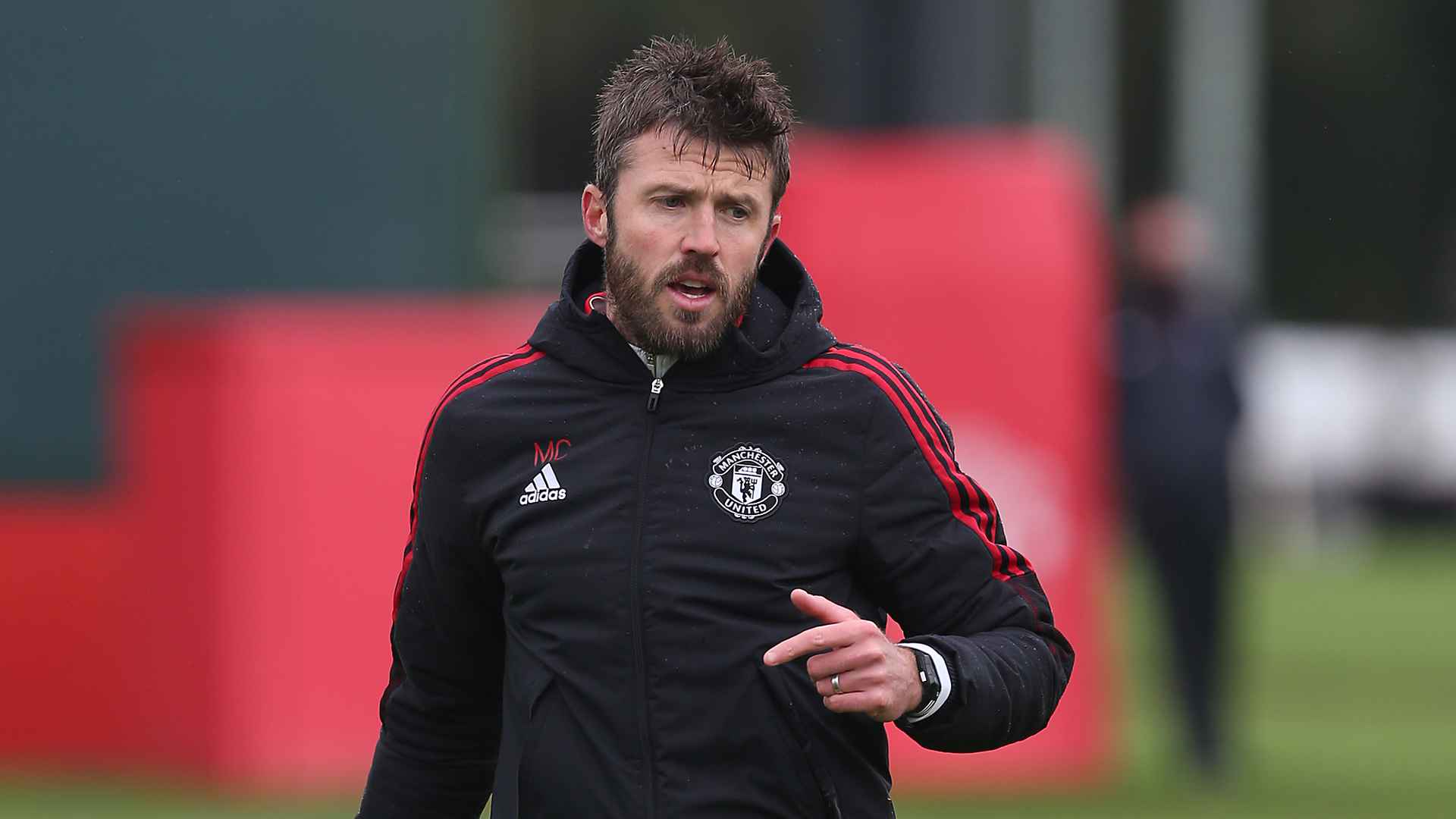 The 40-year-old guided United to victory in the Champions League on Tuesday, in his first game in the dugout, and is hoping to repeat the trick at Stamford Bridge on Sunday against the league leaders who, he admits, will have both confidence and momentum in their favour.

That's what he told Stewart Gardner in his exclusive interview with club media, which you can read in full below...

Michael, first of all, you were at the 'Robbo' premiere last night. An inspirational figure and, for you, as a former midfielder, was he somebody that you admired?
“Massively, yeah. I mean he’s such a presence, even when you meet him. Meeting him for the first time and being around him, even last night, speaking to him and him asking how the week’s gone, he’s an iconic figure in the world of football but especially around this place. He means so much to everyone, he’s given the club so much and I didn’t forget it by any stretch but watching the film and seeing just how good he was: what a footballer, what a player and what a leader of men. Being here for a while and speaking to various players, everyone I’ve spoke to and ex-players he played with, everyone said he was the best, standout the best they’ve ever played with. You’re talking to some big players who’ve said that so Robbo is a special footballer but he’s a good man as well and he’s always been supportive since I’ve been here.”

Sir Alex was there and Wayne was there and Gazza was there, so I suppose that shows what a figure he is… “The turnout was fantastic, that was the first thing that struck me when I walked through the door actually. The amount of people that had made the effort and supported him and wanted to be there. He spoke so well and [people spoke well] of him so, no surprise. As I said, knowing him and what people feel about him, it’s not surprising at all.”

Looking ahead to this weekend, sadly we’re going to be missing the skipper [Harry Maguire] through suspension but I suppose the other way of looking at that is that it does give opportunities for others as well?

“Injuries, suspensions, that’s how it is. It’s been proven time and time again where you might be in that position where you feel: I don’t know where my next game is coming from and this and that but you know you get that chance and that’s how it is. Alex [Telles] came in the other night and did terrific, played really well. Harry’s stepping out of this game and someone else is coming in. That’s just part of football and that’s being here and being ready at the right time.”

Is there any team news update? Luke obviously had an issue with the concussion protocol...
“Yeah, he was out the previous two weeks with concussion and then he came back at Watford and took another bang so we’re just assessing that during this week and see how he keeps progressing through the week. It’s touch and go whether he’s ready for Sunday or not.”

I spoke to Fred earlier this week and he was talking about some of the work he does with you and you do with him and he was involved in both goals in Villarreal with his harrying and pressing…
[Laughs] “He didn’t learn that off me, tackling!”

No! But about his efforts, it sometimes goes unnoticed but the work that he does…
“It doesn’t go unnoticed to us. I think he brings such an energy and such a drive and such a desire when he plays and when he trains. Even the other night there he took a bad twist of the ankle in the first half and stayed on through half-time. Normally after half-time them type of things when you start running again they stiffen up a little bit but he gets through the game and actually has a major part in both our goals. It’s more his mentality and his attitude. And how he is as a person, as much as the footballer which I greatly admire. He’s always there, he always puts himself up there ready for the challenge and he loves the big games and there’s a lot to admire about that.”

What were your Chelsea experiences like because for a lot of your playing career, United and Chelsea that was the battle in the Premier League? Was this the hardest game of the lot?
“We didn’t actually have a great record to be honest, for quite some time, even when we were winning things. Maybe we were winning leagues at times and going up against Chelsea but we didn’t have a great record. Of recent times, that’s changed a little bit but, at the time, for whatever reason… I remember giving a penalty away and it was a league decider. I wouldn’t say I gave the penalty away, it was more I’d question the decision a little bit. We’ve had some right ups and downs… Moscow and losing in the FA Cup final before that. Some real battles. They were a real team over a period of time and they’re a good team now as well, so [I'm] looking forward to the challenge on Sunday.”

And how much of a challenge is this Chelsea side?
“Yeah, it’s always a challenge when a team’s on the up and they’re on a high. Playing with loads of confidence, they’ve got the momentum and whatever individual comes into the team, they’re all in good form so they’ve had some really good results over recent weeks especially. We’re fully aware of that but that’s what we love about being here and the challenges of that and the big games when it really matters. Testing yourself at your limit, so we look forward to the game on Sunday.”

Wins bring belief, does the midweek win bring increased levels of belief going into the weekend?
“Definitely, yeah. It has an impact, for sure. There’s no substitute for winning football matches to how you feel. Yes, performances go some way towards doing that as well, bring confidence and knowing you’re doing a lot of things right. But to get that feeling of a win, there’s no denying or hiding from it. It’s been a bit of a rough time for the boys, so to get that boost was massive.”

Are you enjoying the experience of being a manager in the last week or so?
“Yeah, in a strange way I think as the week’s gone on I’ve come to enjoy it. Initially, it almost didn’t feel quite right after what had gone on but I’ve got a job to do and responsibilities so all of that, clicking into gear and adapting, leading the team, I have enjoyed that. I enjoyed Tuesday night but just as much as I’ve enjoyed the day-to-day, being around the boys and preparing them for that game and this game coming up.”

Finally does it make you think you could have a future career as a manager?
“Stewart, I’ve not had time to think past this week, never mind what’s going on on Monday or Tuesday or after that! [laughs] So I have enjoyed it, to be honest, but whatever happens next, we’ll wait and see.”