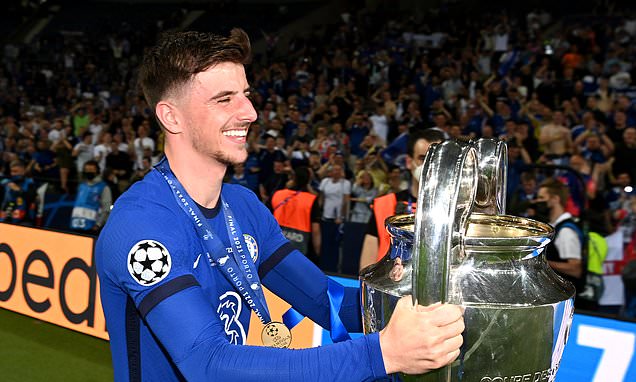 Mason Mount has revealed he will wear black tie for the first time at Monday's Ballon d’Or ceremony in Paris.

The Chelsea midfielder was named on the 30-man shortlist for the prestigious prize after a stellar season.

The 22-year-old collected a Champions League winners' medal and helped England reach the final at Euro 2020.

'To see my name alongside the names I've looked up to all my life is crazy, Messi in particular,' Mount told GQ magazine.


Mount was a ballboy when Chelsea took on Lionel Messi and Barcelona at Stamford Bridge in 2012.

He said: 'When I was younger I was a ball boy during a Barcelona and Chelsea match at Stamford Bridge and seeing him up close was amazing.'

Mount will be wearing a custom, black tuxedo jacket and trousers supplied by Italian luxury fashion company Versace at the Ballon d’Or ceremony.

'I don't really get the opportunity to wear many suits,' Mount explained.

'I could probably count on one hand how many times I've worn a suit in my life. This is all very new to me. The pitch is my natural habitat, and now I have to work out how to do a bow tie. The Ballon d'Or presentation will be the first time I've ever worn black tie!'

Messi has reportedly already been told he will collect his seventh Ballon d’Or but If Mount springs a surprise, there won't be much celebrating.

He added: 'I'm back on the pitch the next morning for training, so even if I do somehow end up winning, it won't be a big night of drinking, unfortunately.'