Chelsea in no rush to open contract talks with fan-favourite

Chelsea fans highlight comparisons between this year and title-winning seasons

Ronaldo has NEVER scored a Premier League goal against Chelsea

Chelsea’s attacking brilliance without a striker could delay Lukaku return

Klopp says Rangnick's arrival is 'not good news' for other teams

Arsene Wenger was desperate to sign Chelsea midfielder for Arsenal 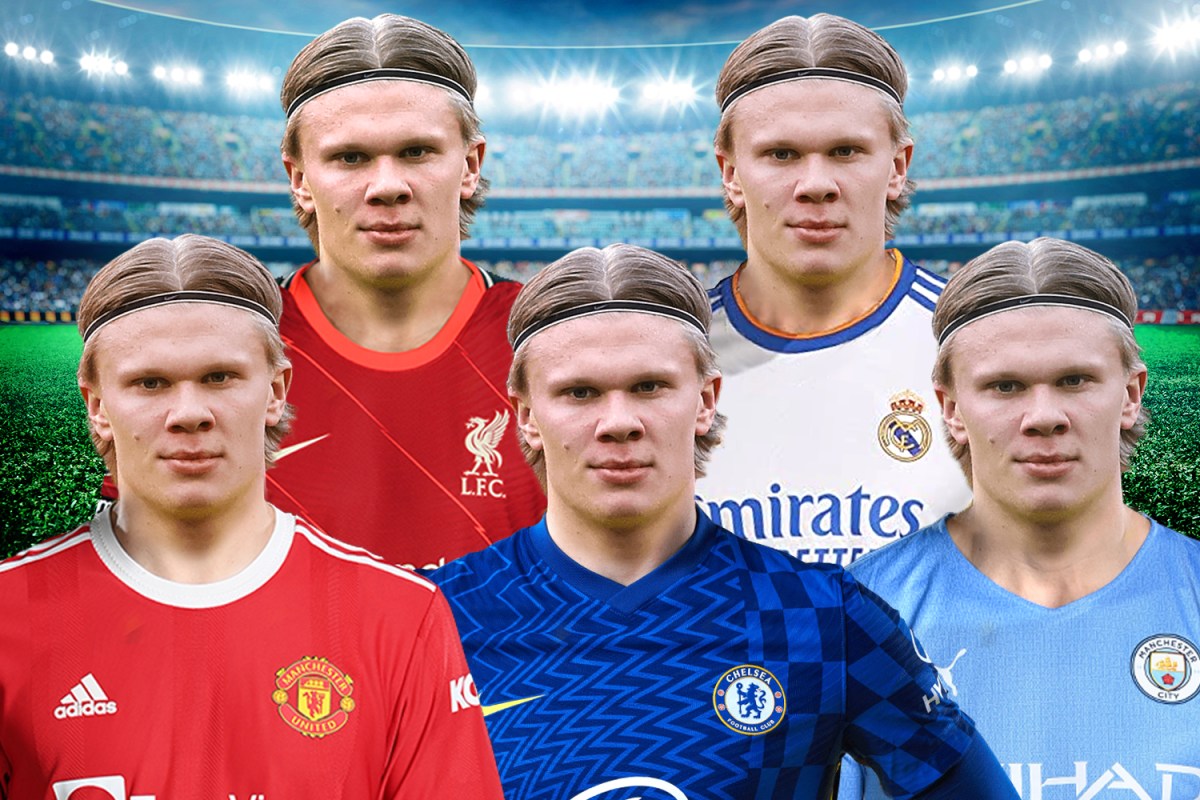 BORUSSIA DORTMUND star Erling Haaland has been in high demand ever since busting onto the scene in 2019 with previous club Red Bull Salzburg.

Haaland left Salzburg for Dortmund a few months later and continues to fire on all cylinders with a total of 70 goals in 69 appearances across all competitions for the German side.

Borussia Dortmund star Erling Haaland has been linked with Manchester United and other clubsCredit: Reuters

The star striker is being monitored by some of the world's biggest hitters, who are all well aware of a clause in his contract that will allow him to leave for a bargain £69million at the end of the season.

But they could now swoop in JANUARY.

Dortmund were eliminated from the Champions League last night, which means the Norway international has less incentive to stick around.

There are understood to be NINE possible candidates that could join the transfer war in two months - but which will come out on top?

Manchester United are among Haaland's biggest fans and have the financial might to lure him to Old Trafford.

However, United will have to wake up from their current slump as they won't pose as a very attractive destination if they fail to qualify for the Champions League.

The Red Devils also don't have the best relationship with the 21-year-old's agent Mino Raiola and the player's father Alf-Inge used to play for Manchester City.

Alf-Inge Haaland's past could work for United's rivals Manchester City by convincing his son to follow in his father's footsteps.

City have yet to fill the huge void left behind by the club's record goalscorer Sergio Aguero, who left last summer for Barcelona.

Manager Pep Guardiola has opted to play most matches with a false nine, even though he has Gabriel Jesus at his disposal.

But it's hard to imagine Guardiola turning Haaland down, especially after reports suggested the Citizens tried to snatch Lionel Messi before he joined Paris Saint-Germain.

Chelsea would also have the financial might to lure Haaland but they are pretty full in attack.

Manager Thomas Tuchel has Romelu Lukaku, Timo Werner as well as Kai Havertz at his disposal and the Blues proved against Juventus that they can still dominate even without those three.

But there have been reports linking Werner with an exit from the club due to a series of disappointing performances.

Nevertheless, we can expect the west Londoners to focus on defence first as Cesar Azpilicueta, Antonio Rudiger, Andreas Christensen and Thiago Silva's contracts come to an end in June.

Erling Haaland is one of the most wanted strikers in Europe after starring for Borussia DortmundCredit: Getty

Liverpool pose as a very attractive destination as they are among the favourites to win the Premier League and Champions League this season.

Therefore, Klopp may opt to invest on tweaks rather than major additions to his squad.

Unlike Liverpool, Juventus are in dire need of top quality in their squad following Cristiano Ronaldo's return to United last summer.

Juve appear like a shadow of their former self after barely managing to qualify for the Champions League last season.

The Bianconeri are still struggling as they are eighth in the Serie A table and were destroyed by Chelsea at Stamford Bridge.

Massimiliano Allegri's side needs a player of Haaland's calibre to turn them into world beaters once more.

Real Madrid have also been linked with Haaland and even held talks with his agent Raiola last summer.

They are in need of an upgrade in attack with Karim Benzema - who is still firing on all cylinders - not getting any younger at 33.

Los Blancos have never really replaced Ronaldo, who left in 2018.

However a major sticking point over signing Haaland is the understanding that Carlo Ancelotti's side are prioritising Kylian Mbappe, whose contract at Paris Saint-Germain runs out in the summer.

Talking about needing star power in attack, Barcelona have gone from the fiery trio of Neymar, Luis Suarez and Messi to Memphis Depay, Martin Braithwaite and Luuk de Jong.

Barca would love to have Haaland over at the Nou Camp and also met with Raiola last summer.

However, their recent financial woes could still get in the way despite the striker's asking price being decreased.

Salihamidzic said: "This [Haaland] is a top player that the whole world probably wants.

"Otherwise we would be full [of] amateurs."

Bayern reportedly see him as the perfect player to take the reins when star striker Robert Lewandowski calls time on his scintillating career.

When Messi joined Paris Saint-Germain from Barcelona in the summer he formed a lethal looking trio with Neymar and Mbappe up front.

However, Mbappe's contract runs out in the summer and the star striker hasn't shown much willingness to extend with Real Madrid knocking on his door.

PSG have been linked with Haaland and have immense financial power to lure him to the Parc des Princes.