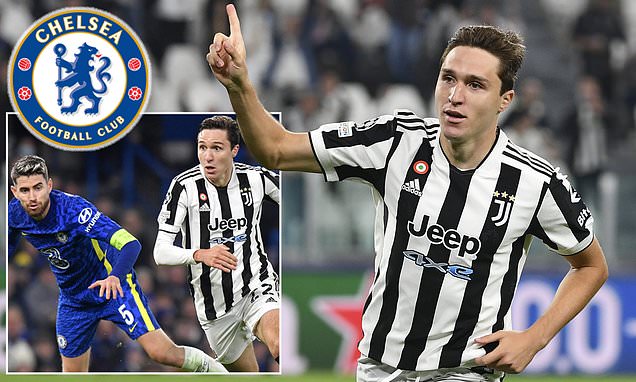 Chelsea are set to make a 'monster' £84million bid to sign Juventus forward Feederico Chiesa according to reports.

Chiesa is currently on loan at Juventus from Fiorentina but the Old Lady have an agreement to sign him on a permanent basis at the end of the season.

Thomas Tuchel is an admirer of the forward and could get backed by chief Marina Granovskaia as they attempt to lure the Italian to west London.

Chiesa caught the eye of big European clubs over the summer after putting in some exceptional performances for Italy which saw him make the Team of The Tournament as they went on to win Euro 2020.


He is widely admired for his explosiveness, versatility and the ability to use both feet to high efficiency. He has scored three goals and assisted three in 15 games this season.

The likes of Bayern Munich and Chelsea have shown interest in Chiesa and it now looks like the Blues could make their move. According to Calciomercato, Tuchel's side are now weighing up an £84m move for the 24-year-old.

The move would come as no surprise with Christian Pulisic, Hakim Ziyech and Kai Havertz all struggling with either inconsistency or injuries.

Chiesa scored the only goal of the game when Chelsea lost away to Juventus back in September. But he was unable to replicate a similar performance as the Blues thrashed the Serie A giants 4-0 at Stamford Bridge on Tuesday night.

Tuchel was backed well in the summer transfer window as he secured his top target Romelu Lukaku for £98m. The Belgian has scored four goals since joining but has been sidelined in recent weeks due to an injury.

Saul Niguez was signed on a loan from Atletico Madrid but the move has been far from a success with the Spain international struggling to force himself into Tuchel's starting XI.

Nevertheless, the Blues sit at the top of the Premier League table and the win over Juventus secured their place in the knockout phase of the Champions League.