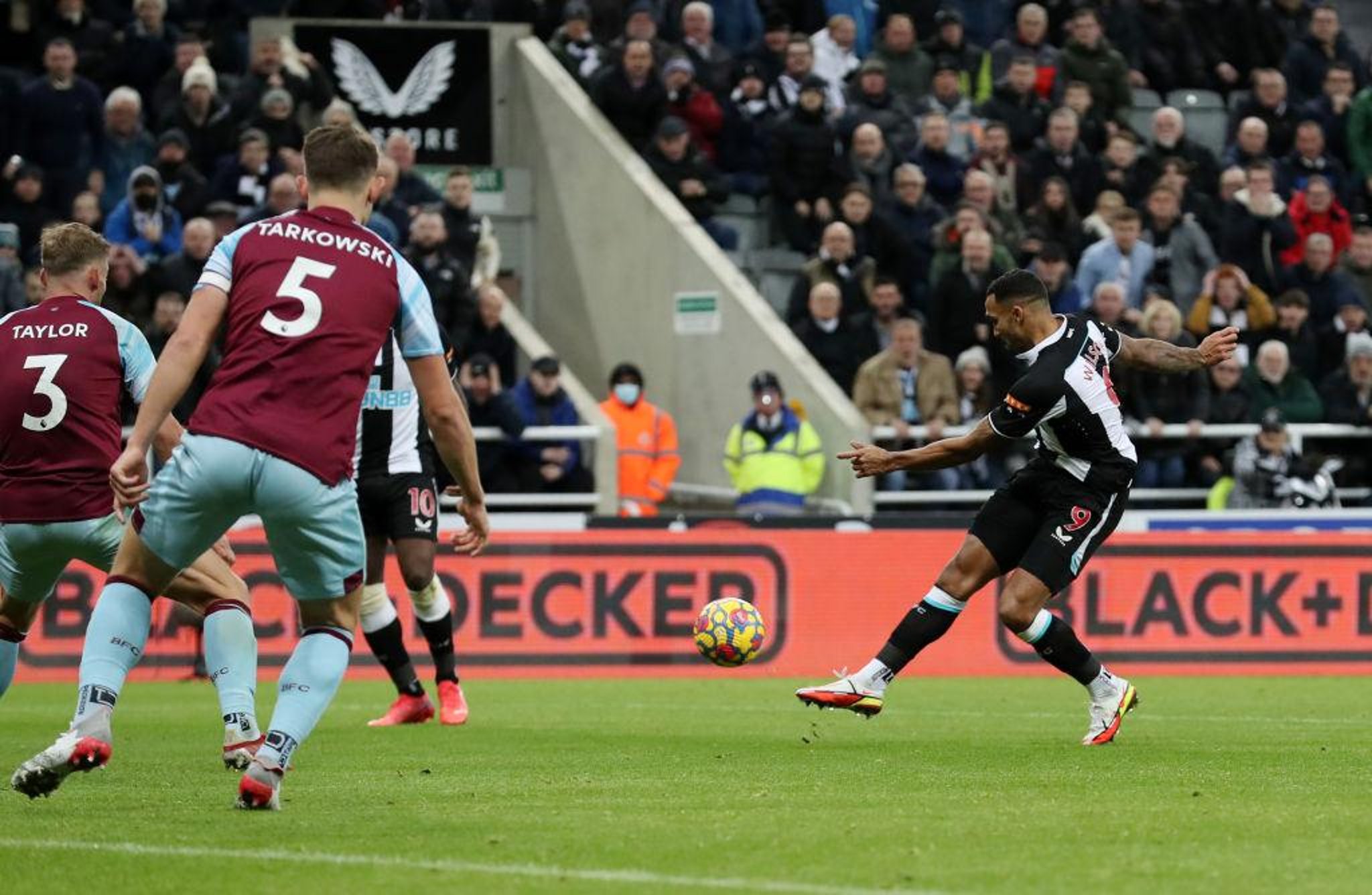 Callum Wilson’s first half strike was enough to secure a 1-0 win against Burnley at St. James’s Park on Saturday afternoon.

Our writer Dominic Scurr delivers his five takeaways from the game…

A big talking point prior to kick-off came when the Newcastle team news dropped, confirming Jamaal Lascelles’ return to the starting line-up having served his one match suspension.

A defensive change was guaranteed following Ciaran Clark’s straight red card in Tuesday night’s 1-1 draw against Norwich City but there was a question of whether the out-of-form skipper or Federico Fernandez – who impressed off the bench in midweek – would come in.

Lascelles got the nod as Fernandez remained as a substitute.

Newcastle’s other change saw Miguel Almiron come into the side for his first start under Howe. He replaced Ryan Fraser, who dropped out from the matchday squad entirely following a slight hamstring issue.

Callum Wilson of Newcastle United scores their side's first goal during the Premier League match between Newcastle United and Burnley at St. James Park on December 04, 2021 in Newcastle upon Tyne, England. (Photo by Ian MacNicol/Getty Images)

After a slow start to the game, Newcastle found the breakthrough after Burnley goalkeeper Nick Pope dropped Joe Willock’s cross while under pressure from Fabian Schar.

The ball fell kindly to Wilson, who still had a lot to do but found the net with an emphatic finish. A nervous VAR wait then followed to see whether Schar had fouled Pope in the build-up but the goal stood and United crucially had the lead.

Eddie Howe, Manager of Newcastle United gives his side instructions during the Premier League match between Newcastle United and Burnley at St. James Park on December 04, 2021 in Newcastle upon Tyne, England. (Photo by Stu Forster/Getty Images)

Wilson’s sixth goal of the campaign would finally prove to be a match winning strike.

Alongside Wilson, Joelinton's impressive form under Howe continued on Saturday afternoon as the Brazilian put in yet another shift.

While he never threatened the goal, the work he did between the boxes certainly didn’t go unnoticed by the Geordie faithful. After two difficult seasons on Tyneside, the 25-year-old has finally won supporters over as the Gallowgate belted out his name to the tune of Oasis’ ‘She’s electric’.

Callum Wilson of Newcastle United celebrates after scoring their side's first goal with Joelinton during the Premier League match between Newcastle United and Burnley at St. James Park on December 04, 2021 in Newcastle upon Tyne, England. (Photo by Ian MacNicol/Getty Images)

You can bet that chant will be making a return at Leicester City next Sunday (2pm kick-off).

This may be a harsh take – but as the likes of Joelinton, Jamal Lewis and Jonjo Shelvey appear to have been handed a new lease of life under Eddie Howe – Allan Saint-Maximin’s influence has waned over the past few games.

The Frenchman carried United under Steve Bruce at times yet played more of a background role once again on Saturday. He saw enough of the ball but wasn’t able to cause his usual problems for the Burnley defence, having scored in each of his last two league outings against The Clarets.

Getting the best out of him will be key to Newcastle’s survival, but it can’t come at the detriment to the team.

Newcastle captain Jamaal Lascelles looks on before the Premier League match between Newcastle United and Burnley at St. James Park on December 04, 2021 in Newcastle upon Tyne, England. (Photo by Stu Forster/Getty Images)

Newcastle’s defensive issues have been well documented so far this season with individual errors costing them countless points.

The hosts were too open at the back in the first half and were almost punished by both Maxwel Cornet and his replacement Matej Vydra.

Lascelles’ return to the side was met with a mixed reception from United supporters given his recent displays. But after a nervy first half, the skipper was able to play to his strengths in the second against the physical Chris Wood as Newcastle defended resolutely to hold onto their lead.

Alongside the impressive Schar, Newcastle were able to limit The Clarets to just one shot on target over the course of the 90-minutes as they kept their first clean sheet of the season.

“[Schar], together with Jamaal Lascelles, who was excellent today, I thought those two really did set the foundation of the victory,” Howe said following the match.

It was never going to be easy, was it?

With 20-minutes remaining, Newcastle enjoyed their best spell of the game. They pegged Burnley back in search of a second goal that would surely kill the game, but it never came.

Almiron was a Nathan Collins head away from doubling the hosts’ advantage while Jonjo Shelvey saw his edge of the box effort saved by Nick Pope.

But as the minutes started to tick away, Burnley threw caution to the wind in search of an equaliser. For a split-second, they thought they’d found it as substitute Jay Rodriguez smashed home only to be promptly denied by the offside flag.

It was clear that United’s first win of the season would be a ‘hanging-on job’.

But even as Burnley pumped balls and bodies into the box, they weren’t able to find a way through as Newcastle had almost every player defending and playing their part.

When that full-time whistle blew, you could feel the weight lifting off Newcastle’s shoulders as St. James’s Park erupted.

You’d think The Magpies had pulled off their great escape by the reaction, not just started it.

But for most of the 51,948 in attendance, this was their first time witnessing a Premier League home win in almost two years.

Not since the 1-0 win over Chelsea, 686 days prior, had a packed St. James’s Park seen Newcastle claim three points – last season’s behind closed doors matches a large reason behind the wait.

Victory meant so much to the players and staff too as they showed their appreciation towards the supporters before taking to the changing room and having a team photo in celebration.

An overreaction to beating Burnley at home? Maybe. But in the context of the moment, this felt massive.

The side still face a mammoth task to keep their Premier League status, but are now just three points from safety with the hope that things can only get better.

Newcastle manager Eddie Howe celebrates with the fans after the Premier League match between Newcastle United and Burnley at St. James Park on December 04, 2021 in Newcastle upon Tyne, England. (Photo by Stu Forster/Getty Images)