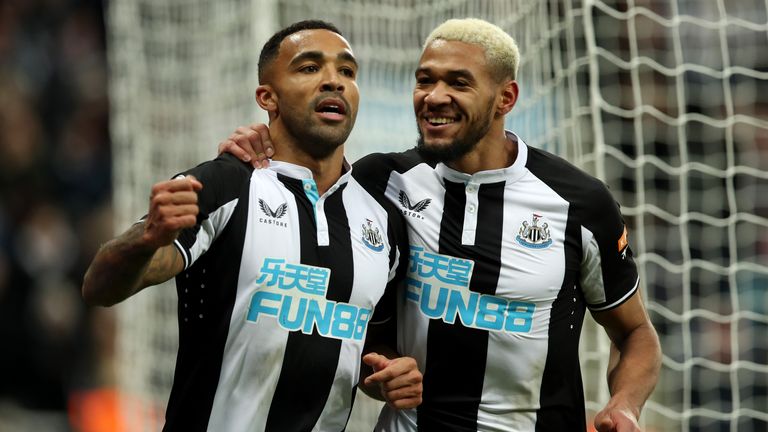 Eddie Howe's side faced a second relegation match-up in as many matches and were keen not to let their lead slip as they did late on against Norwich on Tuesday.

Newcastle went ahead in a disjointed first half, looking very much the basement battle as advertised. Nick Pope spilled Joe Willock's cross, with Wilson the first to it. He thundered the ball home into an open net (40).

The Magpies only improved as the second half continued, but there was a heart-in-mouth moment as Burnley striker Jay Rodriguez had the ball in the net late on. However, the offside flag was correctly raised.

There were jubilant scenes at full-time, with a roar from the usually calm and collected Howe in the dugout. Newcastle did a lap of the stadium after the final whistle, applauding the home fans.

Newcastle's first three points of the campaign lift them off the bottom of the table on goal difference. However, all three teams in the drop zone - including Burnley in 18th - all have ten points as the relegation battle heats up heading into Christmas.

Burnley had a few early sights of goal. Maxwell Cornet sent an effort wide from range, before Johan Berg Gudmundsson rattled the crossbar. After some neat build-up play from Burnley, Josh Brownhill slotted his team-mate in down the right, but Gudmundsson's shot could only find the side of the post.

Cornet went close again in the 21st minute. Charlie Taylor did well to recycle the ball after his initial cross was seen away. He found Ashley Westwood, who in turn played the ball to Dwight McNeill. He then curled in a wonderful cross, with Cornet glancing a header goalwards, but it was saved by a leaping Martin Dubravka.

Man of the match: Callum Wilson.

Newcastle's first sight of goal came shortly after. Allan Saint-Maximin played a delightful chip into the middle, finding Wilson. While he did manage to get some kind of shot onto the ball, Taylor was there behind to stick out a foot and block the effort from close range.

The hosts made the much-needed breakthrough late in the first half. Pope spilled a cross from Willock on the left, bundling into Fabian Schar as the ball slipped from his hands. Wilson was the quickest to it, finding his space before firing home into an open net.

Early in the second half, Newcastle went close again. Wilson slotted the ball through marvellously for Miguel Almiron, who drove into the area. He struck on a tight angle, with the ball firing just wide and taking a graze off Pope's fingertips on the way through.

Newcastle continued to build the pressure as the half went on, racking up a succession of corners - eventually delivering 10 to Burnley's three - although were met unable to find their way past Burnley's defence. Their best chance came as Shelvey curled a sweet strike goalwards, but Pope made another leaping save to see it away.

Image: Burnley striker Maxwel Cornet was taken off injured in the first half

There was almost a moment of déjà vu for Newcastle as Burnley had the ball in the net late on. After some neat build-up play, Westwood whipped in a cross that was turned home by Rodriguez. However, the striker was half a yard offside and the flag was raised.

Burnley pushed for the equaliser as the game entered four minutes of injury time, but half chances from Chris Wood and McNeill went wide as Newcastle secured their first league victory of the season.

Man of the match - Callum Wilson

Image: Callum Wilson fires home in the first half

For the sheer magnitude of the goal, Wilson takes the award. It was a really superb strike too that could easily have go awry as he reacted the quickest to Pope's drop of the ball. He played some other wonderful balls forward too and after being named a Newcastle captain in midweek, stepped up on Saturday afternoon.

Newcastle face Leicester City at the King Power in a game you can see live on Sky Sports Premier League, while Burnley host West Ham United, with both games on Sunday December 12 (2pm).