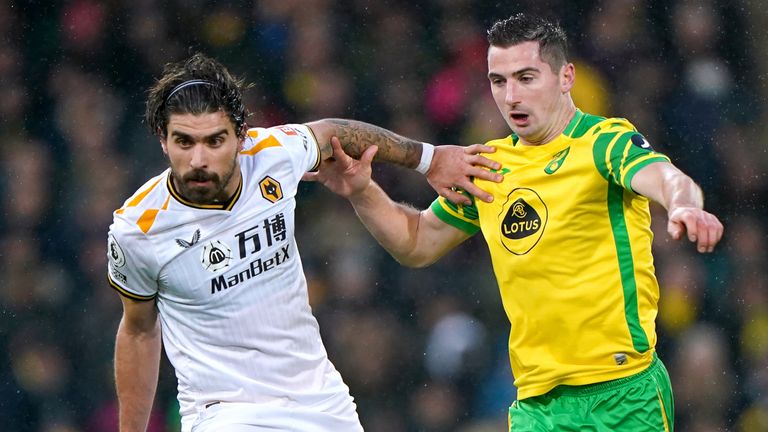 Team news, stats and prediction ahead of Wolves vs Burnley in the Premier League on Wednesday; kick-off 7.30pm.

Ruben Neves is suspended for Wolves' clash with Burnley.

The midfielder has collected five yellow cards and serves a one-game ban, while Yerson Mosquera (hamstring), Jonny (knee) and Pedro Neto (knee) are out until next year.

Willy Boly's muscle injury will continue to rule him out for another two weeks and Daniel Podence (coronavirus) is also sidelined.

Burnley will be without suspended pair James Tarkowski and Ashley Westwood, who both serve one-game bans for reaching five bookings.

The Clarets' home game against Tottenham on Sunday was postponed due to heavy snow and boss Sean Dyche is expected to choose from the same squad.

Dale Stephens is closing in on his first appearance of the season after ankle surgery. Ashley Barnes (thigh) is the only long-term absentee.

Follow Wolves vs Burnley in our dedicated live match blog. Highlights will also be published on the Sky Sports digital platforms and the Sky Sports Football YouTube channel after full-time.

FREE TO WATCH: Highlights from the 0-0 draw between Norwich and Wolves

FREE TO WATCH: Highlights from Burnley's match with Crystal Palace

Analysing the potential match outcome of a Wolves match at the minute is like looking at a complex mathematical equation. I have not a clue.

Bruno Lage's team were very timid in attack again at Norwich. But previously completely deserved their victory against West Ham. Perhaps they are more suited to playing at home where their performance metrics are more encouraging - but I could not tell you if 4/5 with Sky Bet on a home win to beat Burnley is a good or bad bet. I am going to bottle it and side with the draw.

A much better angle in relates to the amount of cards being shown. Referee John Brooks takes charge of his first Premier League game here and if he follows the same pattern as fellow debutants at the top level, he will be a busy man with his cards.

Players are very aware of the referee's inexperience at the top level. As seen with Michael Sailsbury's debut at the weekend in Palace vs Aston Villa, there were lots of occasions where he was surrounded and hounded to put pressure on his decision making. It resulted in six yellow cards being shown and an overturned red card for Douglas Luiz.

Burnley manager Sean Dyche jokes he will wear a short-sleeved shirt next time it snows after he was seen wearing just a shirt at Turf Moor as their match against Tottenham was abandoned on Sunday.