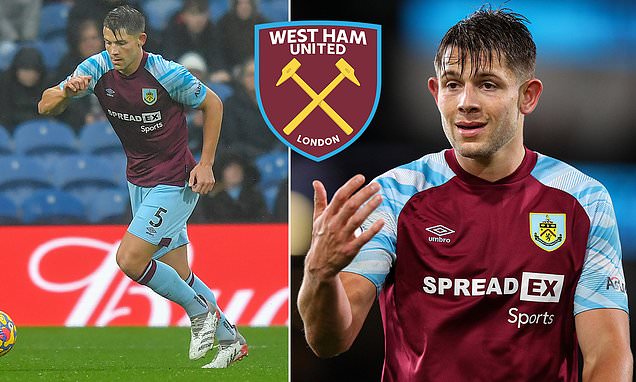 Tarkowski will be out of contract in the summer therefore be available on a free transfer but Moyes is keen to sign the 29-year-old during the winter transfer window and will tempt the Clarets with a bid.

According to The Sun, the Hammers will make a '6m or £7m bid' but that may not be enough as Sean Dyche is desperate to keep hold of the centre-back.

Tarkowski joined Burnley from Brentford in 2016 and has played a huge role in keeping their Premier League status - making 195 appearances during that time.


But their five-year stay in England's top flight is in danger after picking up just one win from their opening 12 games this season.

'Twenty years ago, players signed a contract and six months later, they're sold.

'All I would say about James is that he's a fantastic professional, he has been since he's been here and he continues to be.

'His form this season has been absolutely top drawer.'

West Ham are on the market for a centre-back after Angelo Ogbonna sustained an anterior cruciate ligament injury which looks set to keep him out for the rest of the season.

If they fail in their attempt to sign Tarkowski, the Hammers have alternatives that include Liverpool pair Nat Phillips and Ben Davies. The latter is currently out on loan at Sheffield United while Phillips is yet to make a league appearance this season.

West Ham will be keen to recover from their loss against Wolves when they take-on Manchester City on Sunday. Elsewhere, Burnley will host Tottenham at Turf Moor as they look to mount some sort of momentum ahead of the busy Christmas schedule.