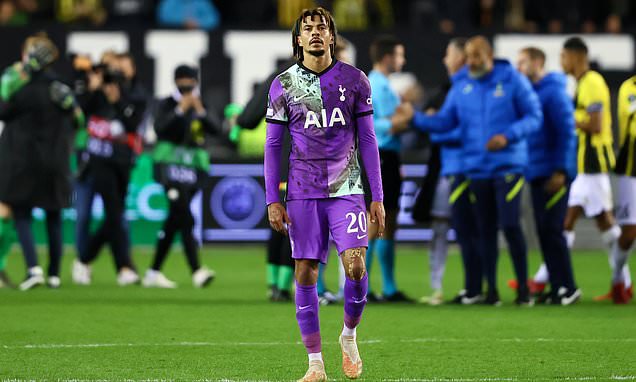 Tottenham star Dele Alli's position in Nuno Espirito Santo's plans has been thrown into uncertainty with the midfielder set to be omitted from the squad to face Burnley on Wednesday.

Sportsmail has learned that Alli has not been included in the party that travels to Turf Moor for the Carabao Cup game that head coach Nuno described as a 'final'.

Alli is not injured, with the Spurs head coach likely to point to the fact he has rotated his squad for the club's European and cup games this season as a reason for his absence.

Nevertheless, the decision casts doubt over Alli's place within the Portuguese coach's plans moving forward, particularly given the midfielder has played a peripheral role in recent weeks.


Alli played a key role for Nuno during the opening weeks of his reign, starting in the first six Premier League matches of the season - even scoring the winner against Wolves.

But the 25-year-old was substituted at half-time of the north London derby loss to Arsenal on September 26 with the team trailing 3-0 at the break and hasn't played a single minute of top-flight football since.

He was an unused substitute in Saturday's loss to West Ham and his wait for further minutes will extend into at least the weekend following the decision of Nuno to leave Alli in London.

'It's going to be a tough match like we expect because Burnley is a good team but it's a good chance for us to improve, knowing that the Carabao Cup is an important competition for us. We have to go game-by-game and then this game is a final.'