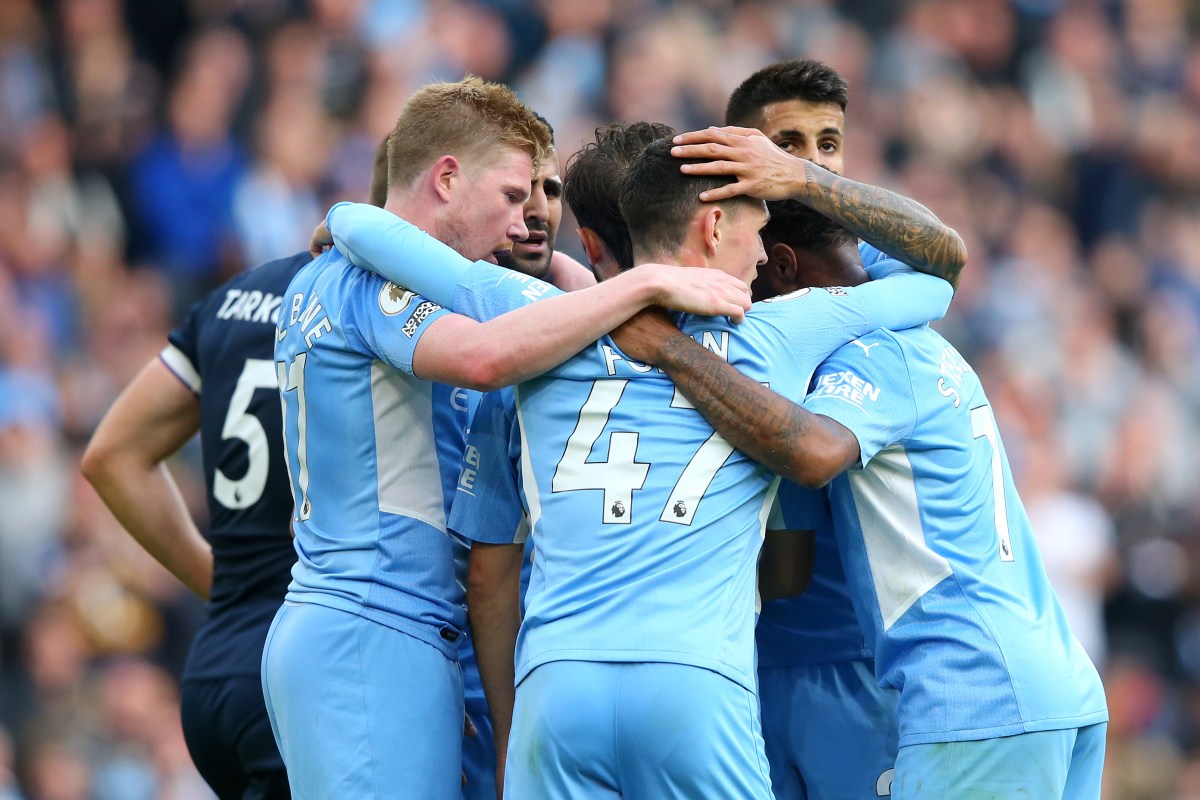 THE STREAK is over, even though goals from Bernardo Silva and Kevin De Bruyne earned City another three points in the Premier League’s biggest home banker.

When Bernardo opened the scoring after just 12 minutes, the City fans immediately broke into a loud chorus of ‘We want five’.

The Portugal international has been instrumental for City in the midfieldCredit: GETTY IMAGES

De Bruyne sealed the win for City with a sweet strikeCredit: GETTY IMAGES

It seemed a reasonable request.

After all, City had won each of their last four home games against Burnley 5-0, and rattled up identical scorelines in their first two Premier League matches at the Etihad this season, against Norwich and Arsenal.

But this was no repeat of the previous walkovers Pep Guardiola’s team have enjoyed when Sean Dyche’s team make the short trip down the M66.

The Clarets will have made the return journey reflecting on the fact that they could have caused one of the upsets of the season if they had taken the four gilt-edge chances they created - three of them while they were still only one goal behind.

But Maxwel Cornet, Josh Brownhill, Chris Wood and substitute Ashley Barnes all failed to find a way past Zack Steffen, handed a rare start with Ederson only just back in the country from international duty.

City’s radar was also faulty whenever they had a glimpse of goal, until De Bruyne smashed home the clincher twenty minutes from time.

His exaggerated sigh of relief was shared by around 50,000 City fans - and by team-mate Riyad Mahrez, who was guilty of some shocking misses.

Burnley must have groaned when they saw Mahrez’s name on the City teamsheet, as he has been their main scourge during the reign of terror at the Etihad.

The Algerian midfielder had scored seven times for City in five matches against Burnley - including a hat-trick in the corresponding fixture last season - and he also scored his first Premier League goal for Leicester against the Clarets seven years ago.

So it was no surprise when he was the first player to try his luck, cutting in from the left and testing Nick Pope with a fierce low drive.

And it was Mahrez who kick-started the move for City’s opening goal.

He threaded a glorious ball between two defenders into the path of Bernado, who set up Phil Foden for a shot - and followed up to smash home the rebound when Pope kept the first effort out at full stretch.

Mahrez's shooting boots were missing as he missed a series of chancesCredit: GETTY IMAGES

His first attempt flew straight at Pope, and the second was a mis-hit that ended up almost as a back pass.

Burnley seemed to take encouragement from the fact City had failed to send the scoreboard into overdrive - and they should have been level after Dwight McNeil sent Cornet haring through on goal.

Cornet boasts an impressive scoring record of his own against City - four Champions League goals for Lyon in just three matches against Guardiola’s side before his £12.8million summer move to Turf Moor.

But his attempt to lift the ball over the onrushing Steffen lacked the required elevation. It crashed against the City keeper’s body, and flew to safety, with the Burnley winger thumping the ground in frustration.

Bronwhill squandered an even better chance for the visiots, screwing his shot across the face of goal from close range - and you just knew Burnley would end up cursing those misses.

City‘s initial efforts to make them pay were not too convincing.

An acrobatic bicycle kick from Raheem Sterling was chested clear by Nathan Collins, and the City player got his legs in a tangle when De Bruyne set up another shooting chance for him.

Sterling started just days after admitting he might have to leave City in search of regular game timeCredit: GETTY IMAGES

But it was Burnley who finished the first half on the attack, with Aymeric Laporte booked for a meaty challenge on McNeil, and Wood’s appeal for a penalty after going down as he and Steffen went for the same ball failing to impress referee Martin Atkinson.

City had clearly become complacent after their early strike. But there was a bit more purpose just after the break, with Bernardo firing narrowly wide with a curling effort.

The shots began raining in after that, although Burnley substitute Barnes wasted another great chance to equalise, shooting tamely at Steffen just moments after replacing the tiring Cornet.

Guardiola tried to shake things up by getting Sterling to drift out wide, with Foden taking over as the false nine.

But after that bright spell at the start of the second half, City had allowed it to become far too scrappy - which clearly suited their opponents.

There was not much  finesse about the second City goal when it finally arrived on 70 minutes.

De Bruyne’s cross was blocked by Erik Pieters, and as Mahrez and Ashley Westwood fell over while lounging for the loose ball, the City skipper reacted quickly and drilled it into the far corner.

That settled City’s nerves, although there was still time for Wood to squander yet another great opportunity at the other end. He fired over the bar from barely six yards after the impressive Collins had headed a free kick into his path.

Despite those misses Burnley’s goal difference did not suffer the usual damage inflicted by City.

But it could have been so much better for Dyche’s battlers...

Man City's 2-0 victory against Burnley as it happened