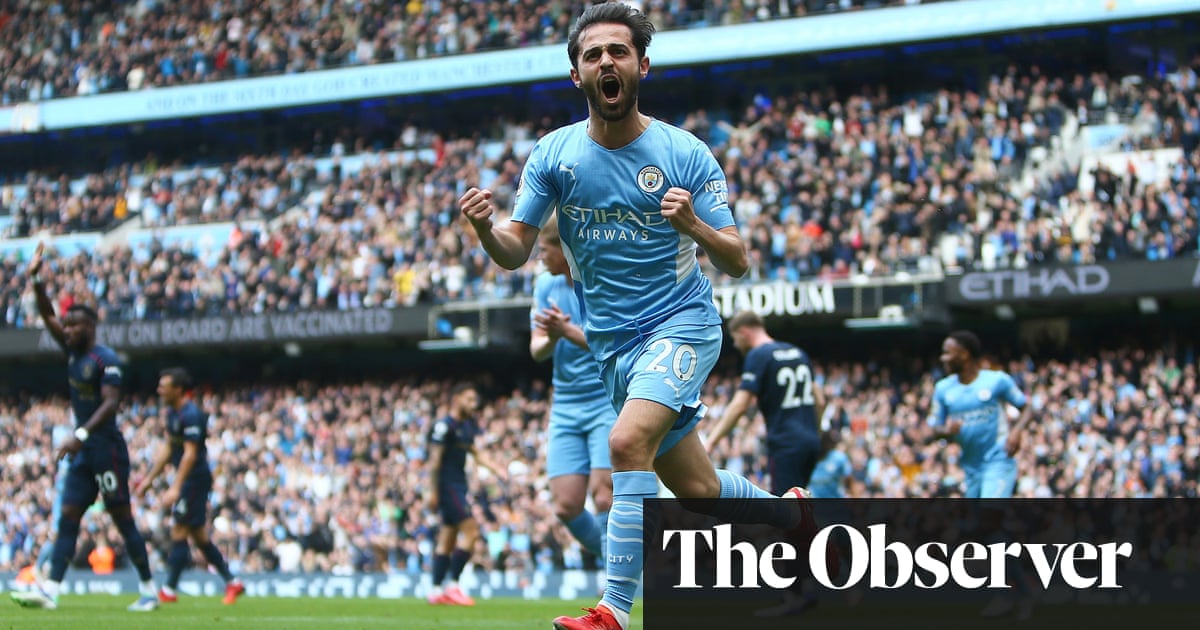 Manchester City can misfire and still claim maximum points. There was a jarring to the usual smooth gears Pep Guardiola’s champions so often show when rolling over an opponent yet by the final whistle they did not care.

City’s aggregate over Burnley is now 32-1 in the last nine meetings and with the previous three league fixtures here ending 5-0, Sean Dyche can at least use this reduced margin as a positive.

Guardiola decided Raheem Sterling’s admission that he was open to leaving was a non-issue regarding starting the 26-year-old, who led the line and was joined in the XI by John Stones, granted his first action for City two months into the season.

Burnley, who lined up 4-4-1-1, were initially on the wrong end of percussive passing as João Cancelo, Riyad Mahrez and Kevin De Bruyne were joined in attack by Aymeric Laporte – Stones’s central defensive partner – and Nathan Aké, the left-back.

So it was City breached their visitors. The ball was thudded from Cancelo to Bernardo Silva, who turned it across the area for Phil Foden. His shot was disguised, aiming to the left of Nick Pope, and when the No 1 parried, a lurking Silva smashed home.

This was 12 minutes in. Last season’s 5-0 rout was only six minutes old when Mahrez struck the first of a hat-trick but at this juncture City appeared as rampant and Dyche’s body language hardly whooped.

Dyche, to his credit, tried a tactical switch that moved Cornet left and the former Lyon man’s quick feet allowed him to hit in a cross that posed Laporte a problem.

City’s early high gear had been lowered and would remain so until the close. Rodri scooped a ball on to Mahrez’s right boot but the Algerian fluffed the volley. Guardiola met this with the same disbelief as when the same player booted wildly high moments later. Josh Brownhill should have caused Mahrez further regret when a rare Burnley foray presented him with sight of Steffen’s goal yet he sprayed wide.

City entered the break appearing predictable, hoping to work the same wide angles via Mahrez and Foden on the latter’s left wing. It was the former whose dinked chip had Sterling acrobatically scissor-kicking an effort.

Guardiola may have had a firm word with his charges as they were becalmed, and the second half began with Foden swapping positions with Sterling. Mahrez, again, was profligate, clipping the bar from close range and the thought, not for a first time this term, was that the actual centre-forward City do not possess might have already put them two or three clear.

Better was a slick Sterling-Foden combination that had Pope diving at the new “ghost” No 9’s feet, but there was a scare for City when the newly introduced Ashley Barnes might have equalised but his attempt was powder-puff.

Next up to miss from close in was Laporte before, at the other end, Matthew Lowton skidded over a delivery that had Dyche bemoaning the lack of a teammate to finish. But then De Bruyne, relatively muted thus far, showed how when his cross first hit Ashley Westwood, the ball rolled back to the Belgian, and his left foot executed a thunderbolt for City’s second.

Towards the end Guardiola eschewed bringing on the maverick talent of Jack Grealish for the shut-the-shop aficionado Fernandinho, who replaced De Bruyne.

This said much about how City had been of lower quality but still the contest ended as mission accomplished.