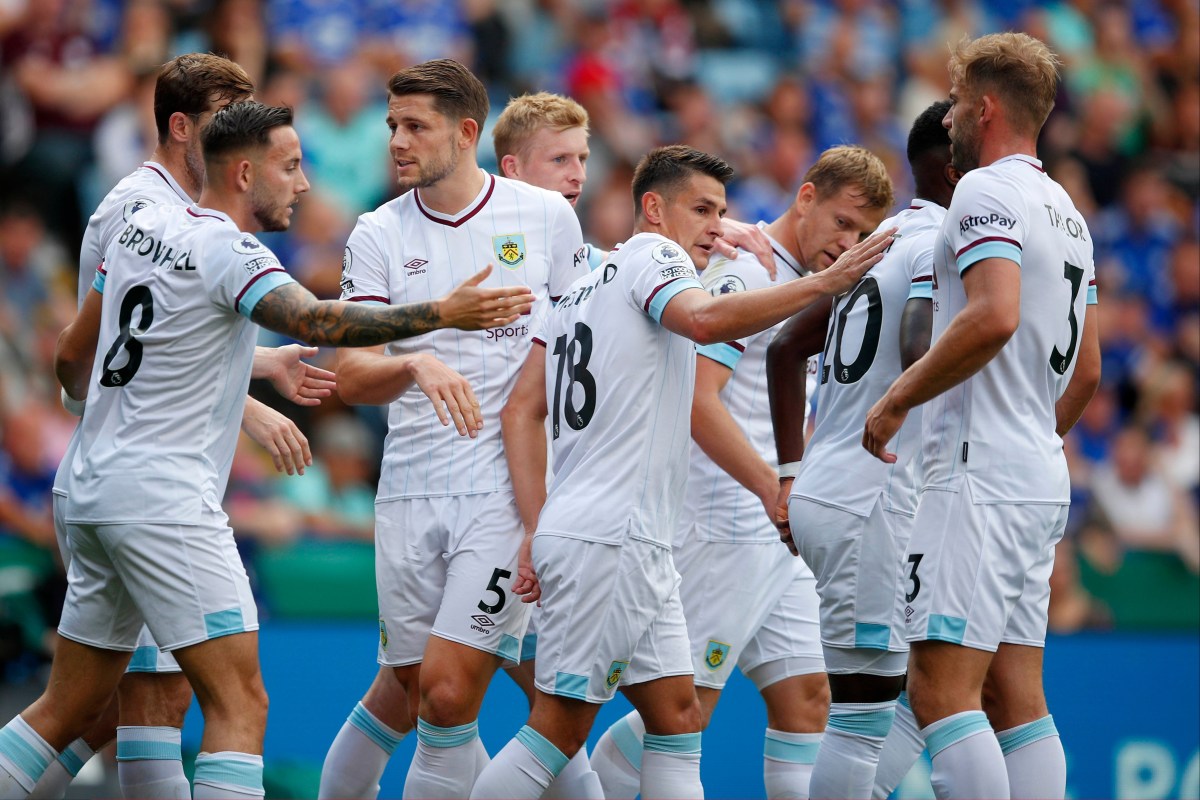 JAMIE VARDY bagged a hat-trick - but for once in his career the Leicester City legend had absolutely no interest in claiming the matchball!

Unfortunately for the 34-year-old Fox, his bullet-header after 12 minutes gifted Burnley the lead in this utterly bonkers game!

Leicester star Jamie Vardy salvaged a point for the hosts against BurnleyCredit: Rex

Although Vardy more than made amends with a double at the 'right' end of the park, it still wasn't enough to put Shaun Dyche's Clarets to the sword.

In fact the visitors will feel they could and should have left with their first win of the season when Chris Wood thought he had snatched a stoppage time winner.

Leicester's ropey defence failed to deal with a spot of head-tennis in their box and Wood pounced to glance his header home off the far post.

It was a huge let off for a Foxes side who, without their defensive rock Jonny Evans, are a pale imitation of last season's fearless outfit who finished the season in fifth.

Without Vardy's killer finishing they wouldn't have even managed a point here.

There was even the rare sound of Brendan Rodgers being booed by his own fans when he substituted fans' favourite Ademola Lookman and sent on James Maddison with his side trailing by a goal.

However, as often happens, Leicester then scored to show the gaffer does know a thing or two after all.

Kelechi Iheanacho, another sub, sent Vardy sprinting clear and the striker calmly rounded Nick Pope before slotting the ball into the empty net to grab Leicester a late reprieve and a point.

Statistics are being used more than ever, with fans as well as managers now poring over a mountain of facts and figures as they study the minutiae of the game.

But the most important and alarming figures for Rodgers yesterday were sixes and sevens.

Because that's where Leicester's dreadful defence spent most of their day as they blundered from one mishap to the next.

Matej Vydra's pace and ability to turn on a dime unsettled Jannick Vestergaard and his centre-half partner Caglar Soyuncu who also had a miserable afternoon.

Yet the pair couldn't be blamed when Burnley took an early lead after 12 minutes - through the one striker on the park neither of them were supposed to mark.

Because it was poor Vardy who popped up with a glancing near post header which left Kasper Schmeichel with no chance!

Ashley Westwood's inswinging corner was a thing of great beauty and Vardy, desperately attempting to head clear, could only glance it into his own net at the near post to give the Clarets the lead.

However Burnley fans blundered by chanting some less than complimentary comments about Vardy's wife Rebakah.

Big mistake … on every level.

Burnley picked up a dramatic draw against Leicester at King Power StadiumCredit: Getty

Because Vardy usually shuts his critics up by scoring - and that's exactly what he did after 37 minutes.

The ball sped from one end of the park to the back of Burnley's net to leave the Clarets gasping.

Without breaking stride Vardy slammed a low right-foot shot to send the ball past Pope, who did the splits and still couldn't keep it out.

Vardy immediately raced over to the Burnley fans and gestured to them with his fingers that their yacking had backfired on them as he milked the moment.

You would have fancied Leicester to go on from there but Burnley had other ides and grabbed the lead again with a quite brilliant goal from their £4.8million summer signing from Lyon, Maxwel Cornet.

Westwood lobbed the ball through to Vydra who left Vestergaard in a spin before crossing to the back post.

Although the ball was behind him, Cornet met it with a stunning right-foot volley which raged past Schmeichel to restore Burnley's lead.

However, Cornet's Premier League debut ended at half-time when he pulled a hamstring and had to be replaced.

But he did more than enough to suggest he will help Burnley climb the table in the weeks to come.