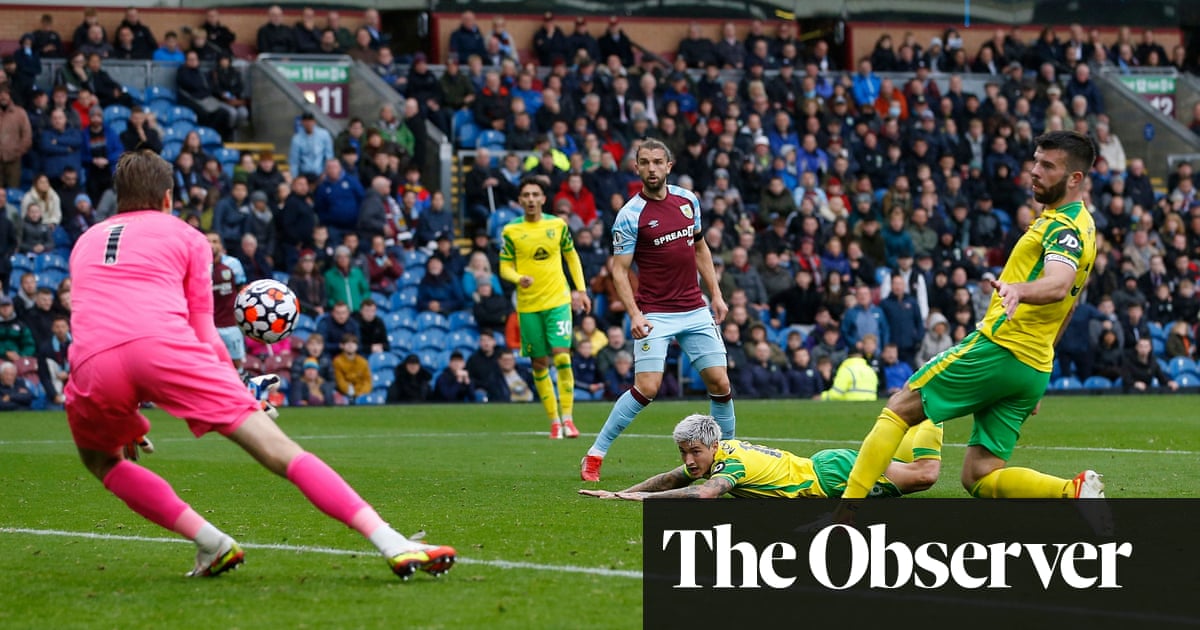 Burnley and Norwich saw their winless starts to the league season continue as they fought out a goalless draw which at least provided a first point of the season for the Canaries.

The first 0-0 draw between these clubs – after 44 meetings in all competitions – neatly summed up how their seasons are going to date. Sean Dyche celebrated 400 games in charge of Burnley and there was a first clean sheet of the season but those were among the few positive statistics on an afternoon when they extended a club-record winless home run to 14 matches.

Norwich at least ended their miserable run of 16 straight defeats in the top flight but there was little on show to hint a radical change of fortunes is imminent. The form of both sides suggested this could be a Championship fixture next season and it played out like one for much of the afternoon with a lack of quality on show.

Max Aarons flashed an early shot wide for Norwich after Matt Lowton had his pocket picked by Teemu Pukki, who would prove a pest for a Burnley defence without the influential Ben Mee, whose absence through injury allowed Nathan Collins a Premier League debut.

Collins, a summer signing from Stoke, was in the thick of it with 15 minutes gone when he was caught by Tim Krul as he came for a free-kick, but Burnley shouts for a penalty were waved away by Kevin Friend.

Tempers frayed again soon afterwards when Chris Wood was booked for a late tackle on Ozan Kabak – the first of four Burnley players to be cautioned before the break.

Their sense of frustration was fuelled again as Friend waved away further penalty claims, though none of them were clear. Matej Vydra was eased over by Grant Hanley as they chased a loose ball before Jay Rodriguez, who replaced his dazed teammate in the 35th minute, saw his header hit Hanley’s chest and then his arm.

Lowton then hit a shot against Dimitris Giannoulis’s outstretched arm late in the half, though the defender knew little about it. Instead, the closest Burnley came to breaking the deadlock in the first half was a Lowton cross which Mathias Normann inadvertently headed at goal, with Krul adjusting well to hold on to the ball.

The angst of the Burnley fans only increased in the second half. Rodriguez was guilty of an air shot when Krul’s interception of Josh Brownhill’s cross sent the ball spinning invitingly up in the air. Dwight McNeil then missed an even better chance, looking surprised as Jóhann Gudmundsson’s cross floated over Rodriguez to find him in acres of space at the back post, bouncing off his leg and harmlessly wide.

In between times, Normann had spun his way into the Burnley box before sending a rising shot over Nick Pope and on to the roof of the crossbar. The visitors threatened again when Charlie Taylor had to clear from under his own crossbar as Aarons stretched to meet Giannoulis’s cross.

Burnley continued to probe. Taylor went down in the box claiming a push from Aarons but got a familiar response from Friend. The substitute Ashley Barnes then dragged Krul wide but when he lifted his cross towards the centre of goal, he saw there were no teammates waiting.

Brownhill then linked up with Taylor to float the ball over for Lowton but he sent his header narrowly over and both sides settled for an uninspiring draw.