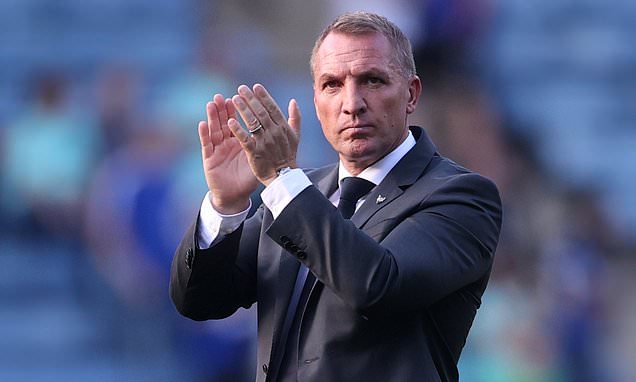 Brendan Rodgers brushed off the boos of the Leicester crowd as his team scrambled a chaotic 2-2 draw with Burnley.

Jamie Vardy scored twice to rescue a point for the Foxes, after earlier heading into his own-goal, but the home fans’ frustration boiled over when Rodgers replaced Ademola Lookman with James Maddison in the 78th minute, with Leicester 2-1 down.

The anger at Rodgers comes barely four months after he guided Leicester to the FA Cup for the first time in their history, after also delivering consecutive fifth-placed finishes in the Premier League in each of the last two seasons.

‘I’ve been here [since February 2019] and this is probably the first time the fans have booed, so I’ll take that,’ said Rodgers. ‘I’d never judge fans on airing their feelings in the stadium. Some decisions you get right and some you won’t but you need to be decisive.


‘Ademola had played against Millwall in the week and is just settling into the squad. He was excellent, particularly in the second half, but he started to tire.

‘The idea was to bring in a player to create something and in my time here James Maddison has been outstanding in the main. He’s a player of real talent brought in to unlock a defence towards the end of the game.’

With Lookman off, another substitute – Kelechi Iheanacho – sent Vardy clear for his second equaliser, after Burnley had led since the 40th minute thanks to Maxwel Cornet’s superb volley.