Premier League predictions: Jones Knows tips Everton to get a result at Manchester United and Newcastle to win at Wolves

Posted Thursday 30th September 2021 on Pain In The Arsenal

Posted Wednesday 29th September 2021 on Pain In The Arsenal

Sunderland to check on Callum Doyle ahead of Cheltenham clash

Posted Monday 27th September 2021 on Pain In The Arsenal

Posted Monday 27th September 2021 on Pain In The Arsenal

What is Leicester’s best structure and XI at the moment? 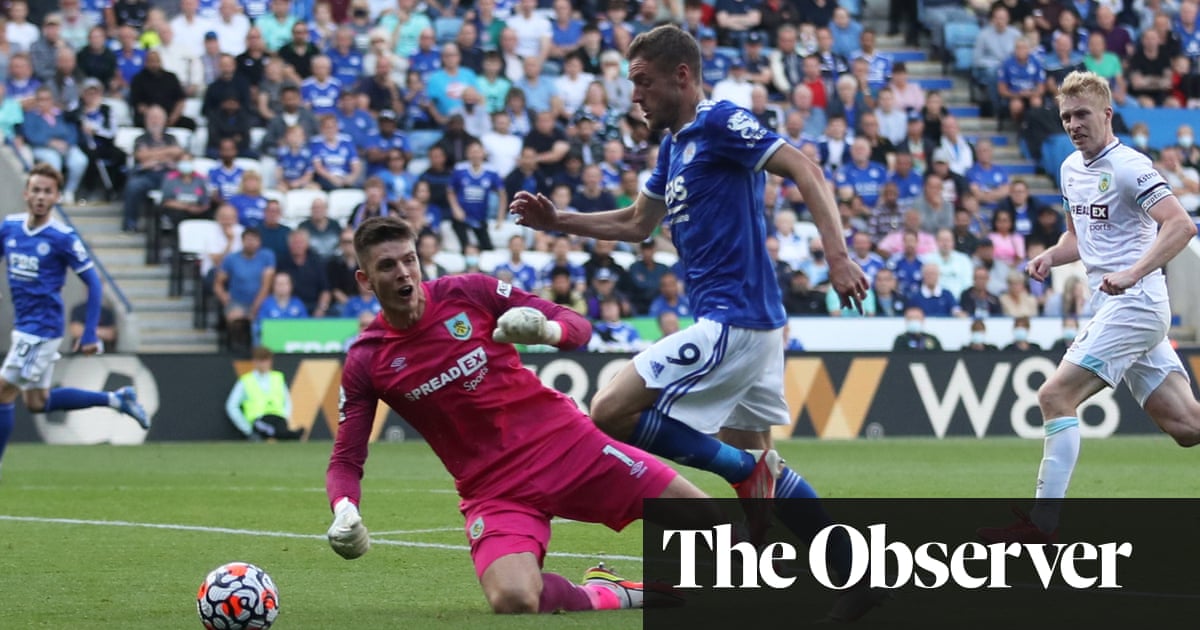 However inconsistently Leicester continue to perform, Jamie Vardy remains a paragon of reliability. The veteran striker may not be claiming the match ball for his three goals here but the two he scored in the right end enabled Brendan Rodgers’s side to rescue a draw.

Vardy, twice equalising after his own goal was followed by Maxwel Cornet’s strike, celebrated his 350th league appearance by taking his tallty to seven goals in his last seven Premier League matches.

The comeback did not mask the paucity of Leicester’s performance, however, and with almost the very last touch of the match Chris Wood headed in after Ashley Barnes’s flick-on only for VAR to deny Burnley their first Premier League win of the season.

Vardy’s day of mixed fortunes and milestones was earmarked when he fluffed good chances either side of Burnley’s opener, side-footing down and over from close range in the 10th minute before failing to connect with Ademola Lookman’s superb low cross when he was put off by Matthew Lowton’s challenge.

The veteran’s touch was also wayward when he misconnected in attempting to head clear Ashley Westwood’s corner. The ball flew backwards over Kasper Schmeichel and into the far corner of his own goal.

Vardy made good eight minutes before half-time, however, with customary proficiency. As Youri Tielemans ran with the ball through the centre, Vardy timed his movement from in to out perfectly and latched on to the Belgian’s pass to fire a right-footed shot first time into the far bottom corner.

But Leicester had been far from convincing, and Burnley regained the lead inside three minutes with a wonderful goal.

Cornet, on his full Premier League debut after signing from Lyon for £13m, was coming in from the left wing when Matej Vydra, preferred up front to Barnes, turned and crossed from the other side of the penalty area. Cornet positioned himself perfectly to swivel and volley right-footed back into the far corner.

A sublime goal gave way to a ridiculous situation within five minutes, though, when Cornet allowed a pass out to the left flank to go out of play as he suffered what looked a like a hamstring injury.

Rather than stay on the sidelines as Leicester took the throw-in, the Ivory Coast winger hobbled back on to the pitch and fell to the turf, clearly wanting treatment. Tielemans understandably played on after such a blatant charade, only to be berated by Ben Mee, the Burnley captain, for not kicking the ball out.

A melee of mild disharmony broke out before the referee, Chris Kavanagh, booked Cornet, who had taken a long time to get back off the pitch to allow the substitute Jóhann Gudmundsson to come on.

It was a game in which neither team seemed to be able to take any sustained control. Burnley, who had mustered only one point and three goals in the league going into this match, were content to defend deep and try to break through Vydra’s pace.

Leicester invariably played passes behind the intended target, with Schmeichel dropping easy catches when under little pressure and the left-footed Caglar Soyuncu looking uncomfortable on the right of defence.

Boubakary Soumaré, the £17m summer signing from Lille, struggled to reach the pace of the game, and the home side looked much improved when he was replaced by Kelechi Iheanacho midway through the second half and the formation changed to 4-2-3-1.

Lookman was much more dangerous and when he was withdrawn late on there were boos, though they turned into cheers for his replacement, James Maddison, who has been out of sorts.

The volume intensified shortly afterwards when Vardy, played onside by Charlie Taylor, ran on to Iheanacho’s pass down the inside-left channel, kept going past Nick Pope and unhesitatingly slotted his left-footed shot into the net.