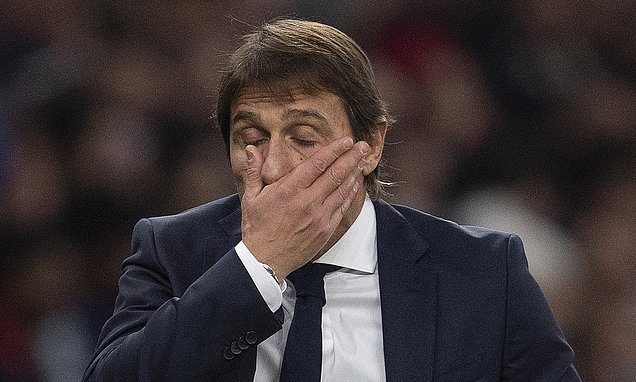 The Premier League are braced for Tottenham to request the postponement of Sunday's game at Brighton after their Covid outbreak.

Spurs were awaiting the results on Tuesday night of follow-up PCR tests for all players and staff.

Those affected have been isolating while they await the results of the additional tests.


The Premier League are expecting those developments to lead to Spurs asking for their trip to Brighton to be rearranged, but nothing will be finalised until the extent of the outbreak is known.

Tuesday's checks threw up the prospect of further cases emerging. Spurs have had experience this season of initial results proving to be false positives.

They next play in the Europa Conference League against Rennes on Thursday, a match UEFA said is 'due to take place as scheduled'.

Under UEFA rules, the game would only be in danger if Spurs had fewer than 13 players registered in their A list squad or no registered keeper available. Spurs named a 25-man A list for the competition.

The emergence of further Covid cases could put the game in jeopardy but all group matches must be played by December 31.

Spurs, second in Group G, need to match third-placed Vitesse Arnhem's result to seal their place in the knockout round. The draw for the next phase takes place on Monday.

Spurs, along with Burnley, have already played one game fewer than the rest of the Premier League after the sides' November 28 clash was snowed off.

After facing Brighton — who have up to eight players missing through injury and suspension — Spurs travel to Leicester next Thursday before hosting Liverpool on Sunday, December 19.

The Premier League have no criteria that automatically trigger postponements, treating situations on a case-by-case basis.

Once a request has been made, the Premier League board decide whether to grant it. They examine what space exists in the calendar for a rescheduled game, how many players are available and what positions they play in.

The Premier League have agreed to postpone games in the past following requests from Aston Villa, Newcastle, Manchester City and Fulham.

Developments could also require members of the broadcast media who conducted indoor interviews with any of the players impacted after Sunday's win over Norwich to be tested for Covid.

Wednesday's press conference will be on Zoom only.