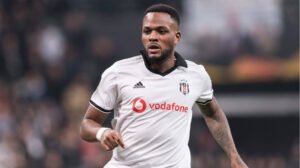 Posted by Dave Langton on December 7, 2021 in News, Whispers

Brighton have entered the race to sign Cyle Larin from Besiktas in the January transfer window, according to a new report from TEAMtalk.

The Hammers have previously been linked with a move to sign the striker, who has been in excellent form during his time with the Turkish side.

Larin can also play on the left wing and has scored five goals thus far this season, in 16 games, and has netted a total of 36 goals in 87 games since his arrival from Orlando City.

The report claims that the Hammers have scouted Larin, as have Everton and Southampton, with Brighton the latest club to make their interest known.

Brighton have struggled so far this season and are looking to strengthen in the January transfer window, with the club aiming to climb the league table in the next few weeks.

The Irons are in the market to sign a new forward in January to provide support to Mikey Antonio.