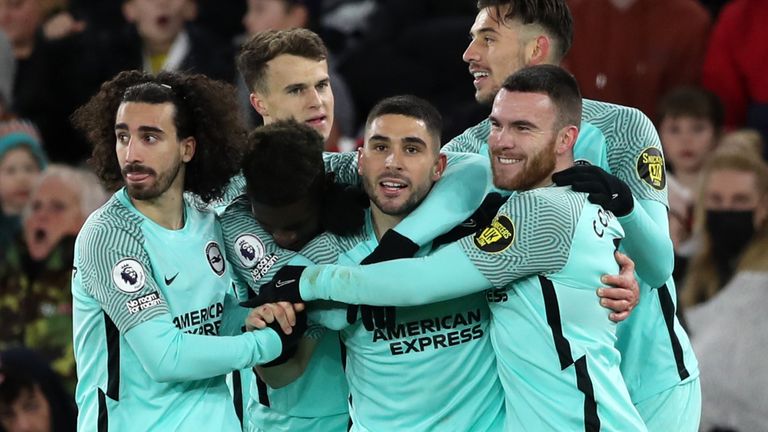 Albanian forward Armando Broja broke the deadlock after 29 minutes as he latched onto Nathan Redmond's cushioned header, raced through and cut inside Shane Duffy's despairing challenge before dispatching a cool finish.

Maupay was denied in the second half by Alex McCarthy from point-blank range but he would atone for the miss deep into stoppage time as he controlled Jakub Moder's rebound to fire beyond McCarthy in front of the euphoric travelling fans.

Southampton's wait for a first home league win over Brighton since the two clubs were in the Championship in November 2011 goes on, but the point moves them up to 14th in the Premier League while the Seagulls remain in ninth - still four points ahead their south-coast rivals.

Man of the match: Armando Broja.

Southampton boss Hasenhuttl was on the verge of three years at the Saints helm, with his side seeking a first league win in four games. Sunday marks three years since Hasenhuttl took charge, and he is the club's longest serving manager in 30 years, since Chris Nicholl's reign ended in May 1991.

"There's not a lot I miss," Hasenhuttl said on the eve of this encounter. "Maybe the mountains from Austria but they aren't running away. They are waiting for me when I stop here."

Image: Brighton struggled defensively in the absence of Lewis Dunk

He was delighted with the start his side made, as inside five minutes the hosts could well have scored twice as the recalled Broja saw his low shot kept out by the feet of Robert Sanchez before the Spaniard was alert to keep out Che Adams' rebound.

Broja would be denied again by Sanchez moments later after wriggling free inside the box as Saints continued their blistering start and the pressure continued to mount on the Brighton goal when Tino Livramento volleyed over from Oriol Romeu's pick-out from a corner.

Lyanco and Armando Broja started as Southampton showed two changes for the visit of Brighton.

Enock Mwepu, Pascal Gross and Tariq Lamptey all started for a Brighton side chasing a first win in all competitions since September.

Brighton posed a threat, however, on the counter-attack as Enock Mwepu passed up two good opportunities to severely test McCarthy before Leandro Trossard did draw a good save from the Saints stopper midway through the opening period from Tariq Lamptey's cross.

But on 29 minutes, the hosts deservedly took the lead in routine fashion as Nathan Redmond's flick on following Sanchez's clearance found its way at Broja's feet, and after the Chelsea loanee cut inside Duffy, he nonchalantly caressed the ball into the net with the outside of his right boot.

Image: Armando Broja had two chances before he did find the target

Brighton had been the architects of their own downfall and having failed to muster a response by the break, Jeff Stelling said on Soccer Saturday at half-time: "There's no doubt, Graham Potter will be happy his side are only behind by one goal."

Potter got the briefest of responses inside the opening five minutes of the restart, but the visitors ought to have fallen further behind when Redmond robbed Trossard to release Livramento and after his cut-back arrived at the feet of Broja, the 20-year-old's dragged shot was inches wide of the post.

James Ward-Prowse then rippled the roof of the net with a trademark free-kick from an acute angle as Potter continued to cut a frustrated figure. A mis-hit from Yves Bissouma landed at the feet of Neal Maupay but the Frenchman's shot was tame and off target.

With tensions growing among the home supporters, Nathan Tella was fortunate not to avoid greater punishment when his flailing arm caught Joel Veltman in the face, but Brighton ought to have levelled with 13 minutes remaining when Solly March's slaloming run found fellow substitute Aaron Connolly in space down the right, and his cross was directed towards goal by Maupay but McCarthy readjusted his feet to keep it out.

Potter hoped his side could build up a head of steam, but that was extinguished in the final five minutes when Trossard was forced off with a serious injury meaning Brighton ended the game with 10 men, as they had done so in the midweek draw with West Ham having also made all three of their substitutions.

The lengthy delay led to 10 additional minutes of stoppage time, but in the eight of the allotted extras Moder's retrieved his own blocked free-kick to volley back towards goal and as the ball landed at Maupay's feet, the much-maligned striker atoned for his early miss to salvage a point.

Southampton boss Ralph Hasenhuttl: "It's a horrible feeling and tomorrow it will be even harder. We're not the first team to concede as late as this but it was absolutely not necessary.

"It's always a possibility when you're only one up, as long as you don't score the second goal, there's always a chance of conceding and this is why we're obviously very disappointed.

"We were discussing at half-time that it's never over until the final whistle is blown. I think it's the third time this season they've scored in over-time this season so we knew they would have momentum, and be dangerous.

"We had the chance to beat them for the first time at home in the Premier League so it's hard to take."

Hasenhuttl conceded he arrived in English football with designs on driving Saints into Europe but quickly had his eyes opened to the Premier League's financial and tactical might.

Prior to this painful and most recent surrender of two points in stoppage time against Brighton, he was asked to review his time at Southampton to date, Hasenhuttl replied: "You want me to give a summary of all that in one minute!

"I've been here a long time now yes, and I knew that it would be tough."

On Saturday, his side ought to have been in a commanding position by the interval but given his record of dropping points from winning positions, the tension in St Mary's was tangible during a second period which lurched towards what felt an inevitable conclusion.

Even after Leandro Trossard was carried off on a stretcher, leading to Brighton playing the 10 additional minutes of stoppage time with 10 men - the second time that has happened in a week following the late draw at West Ham - Saints sat back, cheaply conceded possession, lost all composure and were ruthlessly punished.

It is now 71 points Southampton have dropped from winning positions since Hasenhuttl's appointment in December 2018 - 15 more than any other side in that time.

There were plenty of positives on display, not least the performance of goalscorer Armando Broja. But it is hard to assess how much progress has been made here given how often they have shot themselves in the foot.

Man of the match - Armando Broja

Image: Broja is saluted for his fine first-half effort

Armando Broja has scored in each of his first three home Premier League starts for Southampton, the first player to score in their first three home starts in the competition since Steven Bergwijn in June 2020, and the second youngest player (20y 85d) to achieve that in Premier League history, behind only Danny Cadamarteri in October 1997 for Everton (18y 6d).

He might have scored twice even before he did convert from Redmond's headed pass, but it was his overall hold-up play which belied his age.

Having been given the nod ahead of Adam Armstrong, the youngster on loan from Chelsea took his chance and ought to have been on the winning team.

Hasenhuttl said: "Armando has now started three times and three times he's scored. It's a good average so hopefully he can keep it going."

Southampton face Arsenal at the Emirates on Saturday December 11 (3pm), while Brighton take on Tottenham at the Amex on Sunday December 12 (2pm).