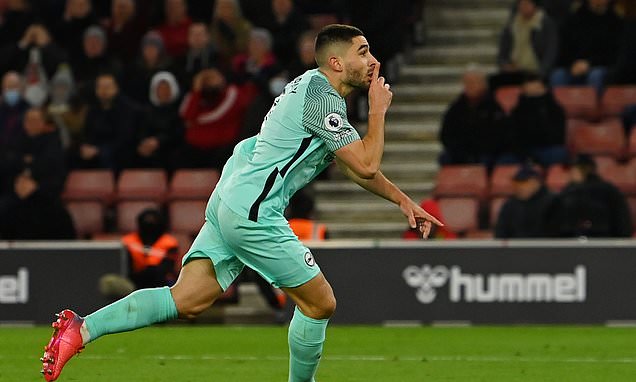 For all the discussion this week about a tactical revolution at Manchester United under Ralf Rangnick, the clearest illustration of his so-called ‘gegenpress’ and its effectiveness was on display 180 miles south yesterday.

Similar name, same style, on a much tighter budget. One of Rangnick’s disciples from their time with RB Leipzig, Ralph Hasenhuttl’s Southampton side are the Premier League’s pressing kings.

For 97 minutes yesterday, Saints played Brighton off the park and made them look damningly average. But on 98 minutes, the so-called wasteful striker Neal Maupay equalised to end hopes of a highly-impressive win.

It was the second time this week that Maupay had rescued a point for Brighton and although it is now 10 winless matches for Brighton, they could be crucial draws.


Especially when noting that this was a richly-undeserved point. Southampton’s off-the-ball work nullified what is usually an easy-on-the-eye passing game for Graham Potter’s Brighton.

Time and time again in this match, Southampton’s intense pressing game allowed them to nick the ball from Albion in dangerous areas and spring fast counter-attacks.

The pattern was set from the opening minutes and Saints might have been a goal ahead if not for solid goalkeeping by Brighton’s Robert Sanchez.

In the fourth minute, possession changed hands on the half-way line and Che Adams threaded in Armando Broja, who raced into the box and was denied by a strong Sanchez save.

The Spanish goalkeeper denied Broja again minutes later - with his feet this time - then a heroic block from Shane Duffy prevented a goalbound shot by Tino Livramento.

Southampton’s pressure continued, Adams and Nathan Tella both going close, and it took well over 20 minutes for Brighton to have a meaningful chance of their own when Alex McCarthy saved from Enock Mwepu’s long-range strike.

And just as the Seagulls were starting to grow into the match and look comfortable, there it came. Saints won the ball back, via Lyanco, and within seconds they were in on goal.

Nathan Redmond played Broja into a similar position to where he shot straight at Sanchez early on, but this time there was no mistake.

Broja saw the commanding Duffy running towards him and about to fly into a tackle, did a Cruyff turn, and prodded home past Sanchez.

Words do not do justice to the composure and turn from Chelsea loanee Broja, 20. One fan on Twitter joked that he had sent Duffy sliding all the way back to his disastrous Celtic loan last term.

Born in Slough, Broja is an Albanian international and that was his third Premier League goal of the season. He should have made it four shortly after half-time, though.

From one former Chelsea man to a Blues loanee, Livramento squared the ball to Broja who, this time, couldn’t find a clean connection and pulled a shot wide from about 12 yards out.

Brighton, usually so assured in possession, struggled to play passing moves and that was largely due to Saints’ pressing game. They set traps all over the field which allowed them to steal the ball and spring into racing attacks.

It was the 77th minute before Saints goalkeeper Alex McCarthy made a save which was more than catching practice. Neal Maupay found space in the box and shot hard and low, but the one-cap once England goalkeeper McCarthy made a heroic save with his feet.

Maupay’s problems in front of goal are well documented but this was another chance he really should have buried.

Their attacking push was thwarted somewhat by a five-minute stoppage enforced as Leandro Trossard was wheeled off the pitch on a stretcher with his right arm in an orange, protective brace.

The Belgian seemed to land awkwardly after a fair coming together with Redmond. It adds to Brighton’s injury crisis, to go with the fact of their first-choice back three, two of them are injured and now Duffy will be suspended for picking up a fifth yellow of the season.

As 10 minutes were signalled for injury time, Brighton started to trouble Saints with a flurry of testing crosses.

And, in the 98th minute, Maupay popped up in the box, latching on the end of a loose ball to score a vital equaliser.