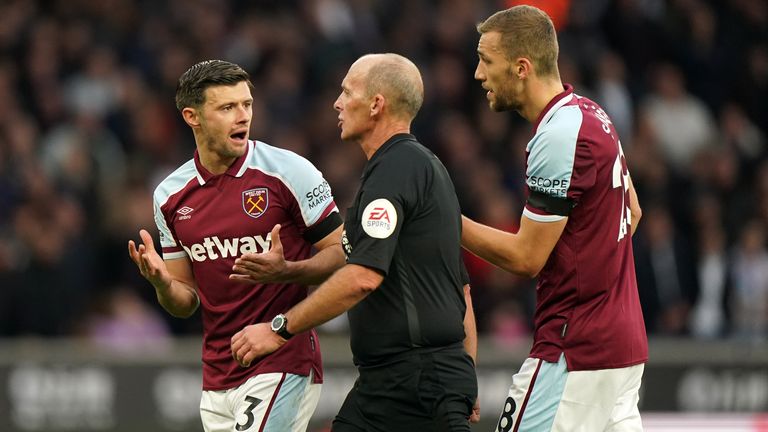 Team news, stats and prediction ahead of West Ham vs Brighton in the Premier League on Wednesday; kick-off 7.30pm.

West Ham hope to have defender Aaron Cresswell available for the Premier League match against Brighton on Wednesday night.

Full-back Cresswell picked up a back problem during Sunday's defeat at Manchester City which saw him substituted during the second half, but has been able to resume training.

Defender Angelo Ogbonna is starting his rehabilitation from a long-term knee injury, which is set for surgery.

Aaron Connolly could make his return to the Brighton squad at the London Stadium.

The Republic of Ireland forward, absent for the Seagulls' last four matches, has been recovering from a heel issue.

Forward Danny Welbeck (hamstring) and midfielder Steven Alzate (ankle) are expected to be training with the team again over the next couple of weeks.

Follow West Ham vs Brighton in our dedicated live match blog. Highlights will also be published on the Sky Sports digital platforms and the Sky Sports Football YouTube channel after full-time.

FREE TO WATCH: Highlights from Manchester City's win against West Ham in the Premier League

The last five meetings between these two have ended all square. It's always a very tight, hard-fought encounter where fine margins are at play for the result.

West Ham have been priced up as the 19/20 favourites with Sky Bet which is screaming to be taken on.

Graham Potter's team arrive without a win in eight matches, but six of those have been draws and their performance level remains high. In those eight matches, their expected goals against data have them as the seventh highest team in terms of defensive output and that can be upgraded as they have faced Liverpool and Manchester City during that run.

They might be fluffing their lines in forward areas due to a lack of quality, but Potter has got them hard to beat.

Added to that, West Ham seem to have lost their spark slightly. Flat in the defeat at Wolves, they hardly raised a glove, let alone landed any punches on Manchester City. A gruelling fixture list and lack of squad depth just may hold them back from mounting a serious top-four challenge. I think they will stumble here.

BETTING ANGLE: Brighton to win or draw (5/6 with Sky Bet)

On the latest Essential Football Podcast, Alice Piper is joined by Sky Sports football writers Gerard Brand and Ben Grounds to look back on another big weekend at both ends of the Premier League table after Chelsea's lead slipped following a 1-1 draw with Man Utd at Stamford Bridge.

PART 1 | Was Michael Carrick right to opt against starting Cristiano Ronaldo - and should United have signed him at all? United's interim-to-the-interim manager's tactics are assessed ahead of Ralf Rangnick's arrival, questions are raised over Chelsea's attacking prowess and will Arsenal fancy facing this United side next given their own form?