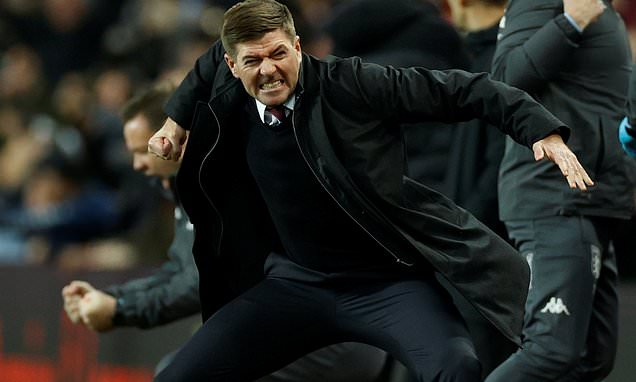 Almost an hour after full-time, as Steven Gerrard spoke to the media, his assistant Gary McAllister walked on to the Villa Park pitch and took some family photographs. Later on, Gerrard did the same.

Both men are multiple winners. Gerrard has won the Champions League. McAllister was part of the Leeds team who won the league title in 1992.

So neither man is exactly short of footballing memories. But still this day meant something. Once the dust had settled on a victory sealed spectacularly late in the game, Gerrard in particular was able to ponder the start of what he hopes will be his second coming as an English football personality of significance.

Many great men play the game in this country. They leave their marks in the grass. But relatively few are fortunate enough or good enough to come round again as managers.


These days, the Premier League’s 20 vacancies are fought over like gold coins. Gerrard, dint of his deeds as a player but also as a rookie coach in Scotland, now has one in his hand.

‘It’s only a start,’ said Gerrard after his team’s 2-0 win. ‘We have to back it up now. But what you saw of me today was authentic. It felt good. This is what I have worked towards.’

Gerrard was specifically referring to his two goal celebrations. The first saw his adrenaline take him almost into the crowd by the side of his dug-out, the second into the arms of one of his staff.

It was instinctive and natural and wonderful to see. Gerrard’s joy was mirrored in every corner of this great footballing theatre by 40,000 home supporters.

They seem like a good fit, Villa and their new manager. Both have something to prove and a desire to punch upwards. It will be hard work from here. Villa expect their new manager to move them towards the European places and the field is congested.

But Villa do have talent, much of it British. The move leading to the first goal in the 85th minute was started by Ashley Young — still capable at the age of 36 — and finished quite beautifully by Ollie Watkins. The 25-year-old is an England international but has struggled this season. This goal will go some way towards fixing him.

The second goal four minutes later was started by the terrific, energetic Scot John McGinn and finished off by Tyrone Mings, restored to the team as captain by the new manager.

There are others, too. Matt Cash at right back had a progressive afternoon. One tackle in the second half was delivered with such ferocity that man and ball were almost deposited into the front row of the stand.

What there is not, of course, is Jack Grealish. Villa’s erstwhile darling is now playing for Manchester City and they miss him.

One of Gerrard’s challenges is to make his team communally effective. He will understand the concept but delivering it will be harder. Villa began well on Saturday.

Five defeats on the spin — as well, we suspect, as Gerrard’s availability and willingness — had served to usher Smith out of the door with what still feels like unreasonable haste, but here they played with enough energy and purpose to force Brighton deeper than any team wishes to be.

Villa soon faded, though, and for long periods Brighton were the better team in what became a disappointing game.

Brighton are a good side, of course. Their manager Graham Potter does not have Gerrard’s playing pedigree but his coaching career remains on a steady upwards trajectory. Some people in the game talk of him as a future England manager and that is not as fanciful as it sounds.

As dusk fell, Brighton were well in the contest. The winning goals could well have gone Albion’s way and Gerrard will know it.

Equally, the expectations are different. Top-half Premier League football would be enough for Brighton. Villa are aiming higher. For Gerrard, the challenge is set.