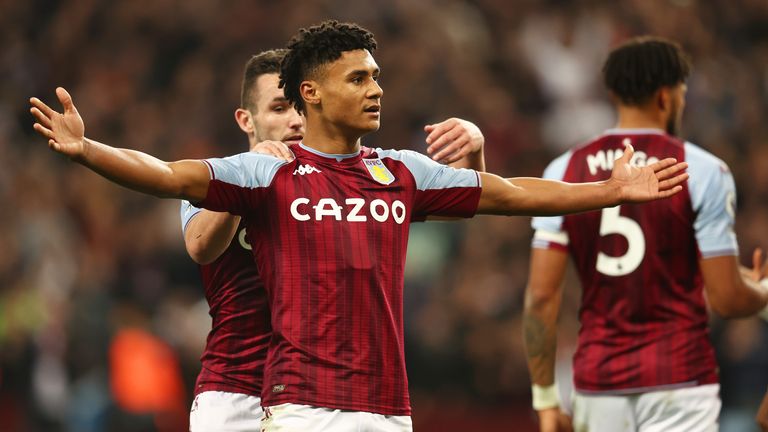 Steven Gerrard's Premier League managerial career got off to a winning start as Aston Villa's late show gave them a 2-0 victory over Brighton.

After a tight first 84 minutes, Villa broke the deadlock through Ollie Watkins' excellent finish, having cut in from the left, before centre-back Tyrone Mings smashed home a second from an angle (88).

Both goalkeepers were tested in the first half - Matt Cash forced Jason Steele into a stop from a header, while Emi Martinez denied both Leandro Trossard and Tariq Lamptey.

The hosts were solid yet uninspiring in front of a packed Villa Park, but they turned it on late in the game to give Gerrard a winning start and end Villa's run of five straight defeats.

Brighton are now without a win in seven in the Premier League after winning four of their first five.

Man of the match: John McGinn

Gerrard was given a rapturous welcome to Villa Park on his Premier League managerial bow, and his side looked the more energetic in the first 15 minutes.

The first big chance came their way as Matt Targett's deep cross fell to fellow full-back Cash at the far post, but his low header was saved well by Steele, coming in for the suspended Robert Sanchez.

Steven Gerrard made three changes from the side that lost at Saints before the international fortnight as Tuanzebe, El Ghazi and Bailey came out of the XI for Konsa (back from suspension), Ramsey and Ings (both back from injury).

Steele came in for the suspended Sanchez for Brighton as one of four changes. Veltman, Mwepu and March also came out, replaced by Webster, Moder and Gross.

Brighton took the sting out of Villa and settled into the game thereafter, dominating the ball and creating two big chances. First, Trossard forced a reflect block from Martinez in the Villa net from a tight angle, before Martinez was forced into another fine save, spreading himself at the back post to deny Lamptey.

Villa nearly took the lead early in the second half as Mings' header from a John McGinn free-kick was tipped away well by Steele, but, as in the first half, Brighton stemmed the flow and grew into the game with more of the ball.

Gerrard attempted to change things up by bringing Leon Bailey on for Danny Ings, moving Watkins into a central position, while the frustrations continued for £38m signing Emi Buendia, brought off with 20 minutes to go after another tough afternoon.

It was Ashley Young, Buendia's replacement, who burst Villa into life with six minutes remaining, just as the game looked like it could go either way.

Turning well in a cul-de-sac in his own half, Young's brilliantly-weighted pass released Watkins, who had plenty to do in the final third. Cutting in from the left inside the box, he fired an unstoppable effort past Steele and into the far corner to send Villa Park wild.

Villa could smell a second and got it four minutes later; McGinn's wicked cross was only half-cleared by the stretched leg of Adam Webster, and, after scoring his first England goal against San Marino in midweek, Mings squeezed the ball home from a tight angle from a fair distance out, with Steele struggling to get back into his goal.

Bailey almost put the cherry on top with a first-time volley parried by Steele in stoppage time, and there was a sense of jubilation and relief in equal measure at full-time as Villa ended their rotten run, with tricky fixtures on the horizon.