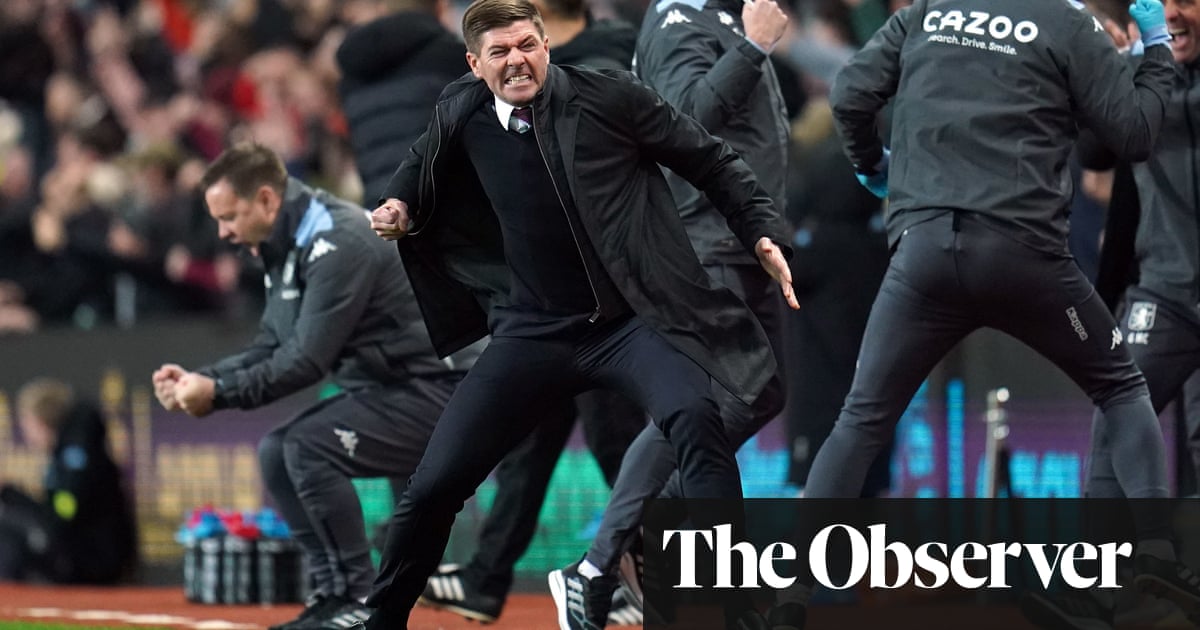 Steven Gerrard said preparing for his interview at Aston Villa left him short of sleep but his first game, even though it was trying at times, would have been everything he dreamed of on his first day in the dugout as a Premier League manager. With time ticking away, Ollie Watkins cut inside on to his right foot and rippled the Brighton net with a brilliant finish and five minutes later the Villa captain, Tyrone Mings, turned in from close range to seal victory and end their five-match losing streak. Gerrard raced down the touchline, high-fived a couple of his backroom staff and punched the air with both fists. For a moment, it was almost as if he had never been away.

The pitchside cameras were trained on Gerrard’s every move and outside the ground, before a sellout crowd flooded through the turnstiles, his name was on the lips of supporters, his face on a traffic sign on Trinity Road – arguably the most noticeable example of Gerrard fever. He did not take charge of his first training session until Monday and some players, such as the Argentina goalkeeper Emiliano Martínez, did not return to Bodymoor Heath until later in the week but, regardless, Gerrard promised his team would be aggressive.

His entrance was decidedly more low-key, striding out of the tunnel in a black trenchcoat, high-fiving a young fan and making a point of applauding the Holte End. Then, hands in pockets, he allowed himself the briefest of moments to survey the scene before shaking hands with Graham Potter, taking charge of his 100th Brighton game. Gerrard said his stomach had been “doing somersaults” in anticipation of taking charge of his first game here and the mood among supporters was similar. Brighton did an impressive job of muting the atmosphere and Martínez saved well to deny Leandro Trossard.

This week Gerrard conceded his primary problem to solve was keeping the ball out of the Villa goal – they had leaked 13 goals in their previous five matches – and they attacked with thrust. Matty Cash, who made his Poland debut during the international break, and Matt Targett overlapped frequently from full-back. Gerrard’s 19-goal top scorer at Rangers last season was a right-back in James Tavernier and Villa, playing the same 4-3-3 formation he utilised in Scotland, found joy in wide areas. Targett’s sweeping ball from the left provided Villa with their first opening, with the Brighton goalkeeper, Jason Steele, deputising for the suspended Robert Sánchez, alert to repel Cash’s header.

A break in play before the half-hour mark allowed Gerrard and his assistants, Michael Beale and Gary McAllister, who previously worked at Villa Park under Gérard Houllier, to feed instructions to their players. Perhaps it was purely coincidental that a couple of minutes later Emiliano Buendía threaded a pass through for Danny Ings, prompting the North Stand to rise to their feet, only for Steele to rush out of goal to smother the ball. Villa showed patches of quality but were too often clumsy in possession. Brighton were anything but, a delicious cross by Marc Cucurella eluding Trossard at the end of a slick move that began 70 yards away with Shane Duffy, and in the two minutes of first-half stoppage time, Tariq Lamptey saw an effort blocked by Martínez.

Villa began the second half with similar gusto, Jacob Ramsey drawing a foul 25 seconds after the interval, but long spells of Brighton possession soon quashed such optimism. Gerrard turned to Leon Bailey in place of Ings, who looked understandably short of fitness on his return, and then Ashley Young, with whom he played for England, in place of Buendía, who thumped his seat in the home dugout in frustration. Brighton’s first substitute, Solly March, meanwhile, was at the centre of a flashpoint within seconds of entering the pitch. Cash charged down the right and into the box, where March, feet presumably still a little cool, clashed with the defender before backing off in the nick of time.

Villa wanted a penalty but passed up a golden chance inside the box with 12 minutes to play. Bailey’s high cross from the right troubled Steele, who unconvincingly punched clear to John McGinn. But the Villa midfielder, seemingly caught in two minds, dawdled on the ball and allowed Adam Webster to rake the ball away from danger. But six minutes from time Watkins gave Gerrard’s Villa lift-off, lashing a shot into the far corner and Mings wrapped up victory, in the right place at the right time after Webster’s clearance.