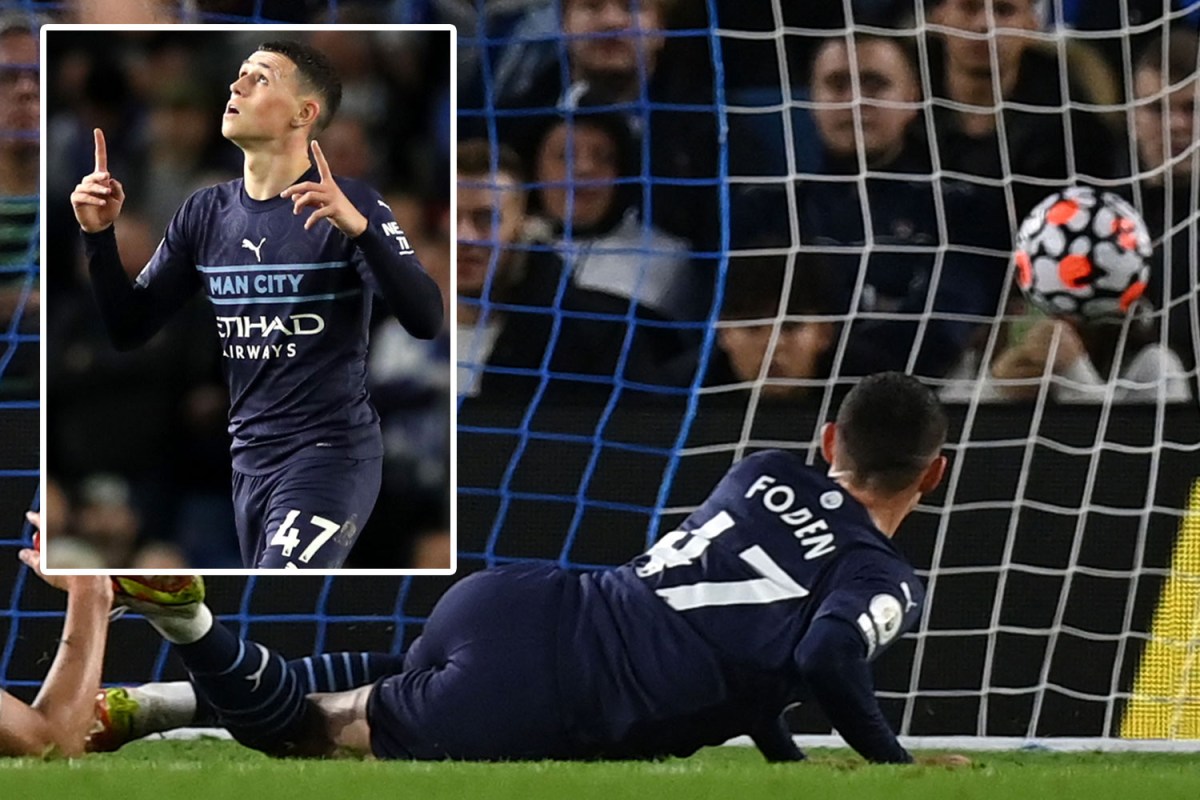 GRAHAM POTTER probably needed a cuddle after this.

The Brighton boss had said before the game he hoped for a hug from Pep Guardiola following their mini bust-up in this fixture last season.

But City showed no love to the Englishman’s side who were ripped apart in a blistering first 31 minutes.

Phil Foden, shining again, netted twice after Ilkay Gundogan had set the champions on their way.

City were enjoying themselves so much that their travelling supporters were doing their Poznan celebrations ten minutes before the break.

There was to be no repeat of the second-half turnaround from last term where ten-man City threw away a two-goal lead to lose 3-2.

That day, Potter annoyed Guardiola with his reaction to the first of Brighton’s three goals, which the Albion boss admitted this week was “poor”.

But Potter only had a late Alexis Mac Allister penalty to celebrate in a second half which, in fairness, his side dominated.

Ilkay Gundogan scored the opener at the AmexCredit: Reuters

Foden walked off with the match ball after a commanding displayCredit: EPA

Yet even that goal was chalked off when sub Riyad Mahrez crashed the ball into the net four minutes into injury time.

Guardiola's squad warmed up wearing T-shirts bearing the message “We’re With You Guido”.

It was in reference to City fan Guido de Pauw who was attacked in Belgium following the club’s 5-1 victory at Club Bruges in the Champions League on Tuesday.

The away supporters then unfurled a huge banner displaying the same words just before kick-off.

City did have only fond memories of coming to the Amex until last season’s thriller.

They ruined Albion’s Premier League bow with a 2-0 win here in August 2017.

While their 4-1 victory on the final day here two years later saw them pip Liverpool in the most thrilling title race ever.

It also heralded the Potter era as a day later, Chris Hughton was ruthlessly axed and the former Ostersunds chief brought in within a week.

City continued to make hay despite Potter’s arrival with a 5-0 demolition the season before last, but then came that amazing 3-2.

Gundogan got the ball rolling for City after 13 minutesCredit: PA

Foden scored his first goal in the 28th minuteCredit: Reuters

Gundogan opened the scoring in that game too as he did here in the 13th minute.

Lewis Dunk then went one better than his goalkeeper as he somehow kept Gabriel Jesus’ effort out with the most acrobatic of clearances right on the goal-line.

The skill of the Seagulls skipper’s intervention was breathtaking as he hooked it away with his weaker left foot with Foden bearing down on him.

But with Guardiola’s pass-masters in this kind of mood, the hosts were never going to repel them for long.

And minutes later they did succumb to yet another City attack - thanks to Sanchez’s howler.

A shot from Foden looped up and should have been a routine catch for Brighton’s burly goalkeeper, but he dropped it under pressure from Jesus.

Bernardo Silva continued his mesmerising start to the campaign with a quick-thinking flick of the loose ball back over his head towards the goal, and there was Gundogan to blast home.

The hosts were claiming a foul on Sanchez by Jesus but the Brazilian only had eyes for the ball and VAR rightly backed up referee Kevin Friend’s decision to give the goal.

The £100million man kept his composure to square it for false-nine Foden who fired into the roof of the net, defying Dan Burn’s desperate lunge.

Potter’s side were still rubbing the stars out of their eyes by the time they fell further behind - and once again Bernardo’s brilliance started it.

The Portuguese was too sharp for Brighton’s defence as he intercepted a loose pass and gave the ball to Jesus, who in turn found Grealish.

The ex-Aston Villa man had a shot saved but Jesus gobbled up the rebound and fired in off Foden - who was credited the goal - with Sanchez’s weak hand not enough to keep it out.

Brighton finally registered a shot on target in the 43rd minute through Solly March’s scorcher which Ederson spilled before gathering.

The Brazilian stopper looked far more assured as he denied Pascal Gross early into the second half as Brighton improved dramatically.

Potter upped the ante by bringing on the jet-heeled Tariq Lamptey, who was welcomed by a crunching challenge from Joao Cancelo that earned the Portuguese a caution.

City showed a gritty side to their game for much of the second period as Albion finally turned up.

Jesus epitomised City’s doggedness as at times he took up a right wing-back position and worked tirelessly to track Marc Cucurella.

Brighton did grab a late consolation when sub Enock Mwepu was felled in the box by Ederson, who could not keep out Mac Allister’s spot-kick.

It was no more than they deserved but City were still worthy winners thanks to their first-half blitz.

Unmarked Mahrez then put further gloss on the scoreline deep into stoppage time with a thumping finish.

Guardiola offered only a respectful handshake to Potter at full-time with the message clear: ruthless City mean business.

Man City's victory over Brighton as it happened