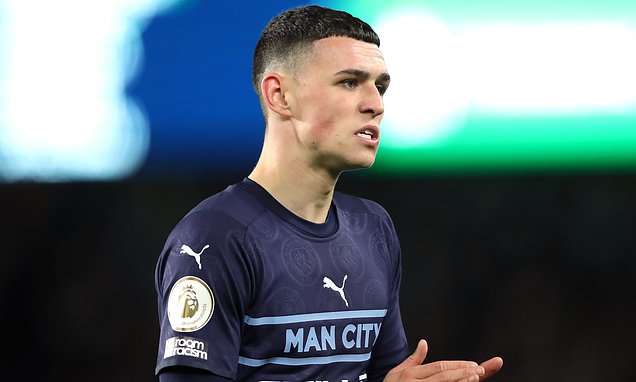 Pep Guardiola hailed two-goal Phil Foden last night, saying the 21-year-old Englishman is too good of a footballer to be pigeonholed into one position.

Foden was used as a false nine against Brighton and Guardiola was asked about the attacker’s best position.

'What playing football means is that they can play in any position. They understand the game.


‘Unfortunately in the last games he had many, many chances in front of the goalkeeper.

'At Anfield, today, in front of the goalkeeper he didn’t take good decisions because he’s too young. He will learn a lot. The moment he will make another step, he will score more goals.

‘It’s not a problem. It doesn’t matter what position he plays. He plays good. Sometimes we need him here, there, right, left, it doesn’t matter. He’s important.’

City’s players warmed up wearing ‘we’re with you, Guido’ t-shirts.

It was in tribute to Guido De Pauw, the 63-year-old supporter who was attacked after the club’s 5-1 Champions League win over Club Brugge on Tuesday. He remains in a coma but is in a stable condition.

Brighton also paid tribute to Guido before kick off at the Amex Stadium.

The home side’s supporters, even when 3-0 down, did not desert their team. They played their part in encouraging the team to attack in the second half, which they did.

Brighton boss Graham Potter said: ‘They didn’t get on our backs. They were tremendous.

‘The players gave everything. Of course it's disappointing to lose. We have to say Manchester City were better but our performance was something to be proud of.

'I could not be prouder of the team. It's not easy playing this type of opposition.’

On Foden, Potter added: ‘It’s very, very, very difficult. He’s not just one guy. He’s got a fully-functioning amazing team with him. So you’ve got the individual quality but also a fantastic team structure.’