Potter tells fans who booed: Have a go at me - but we'll disagree 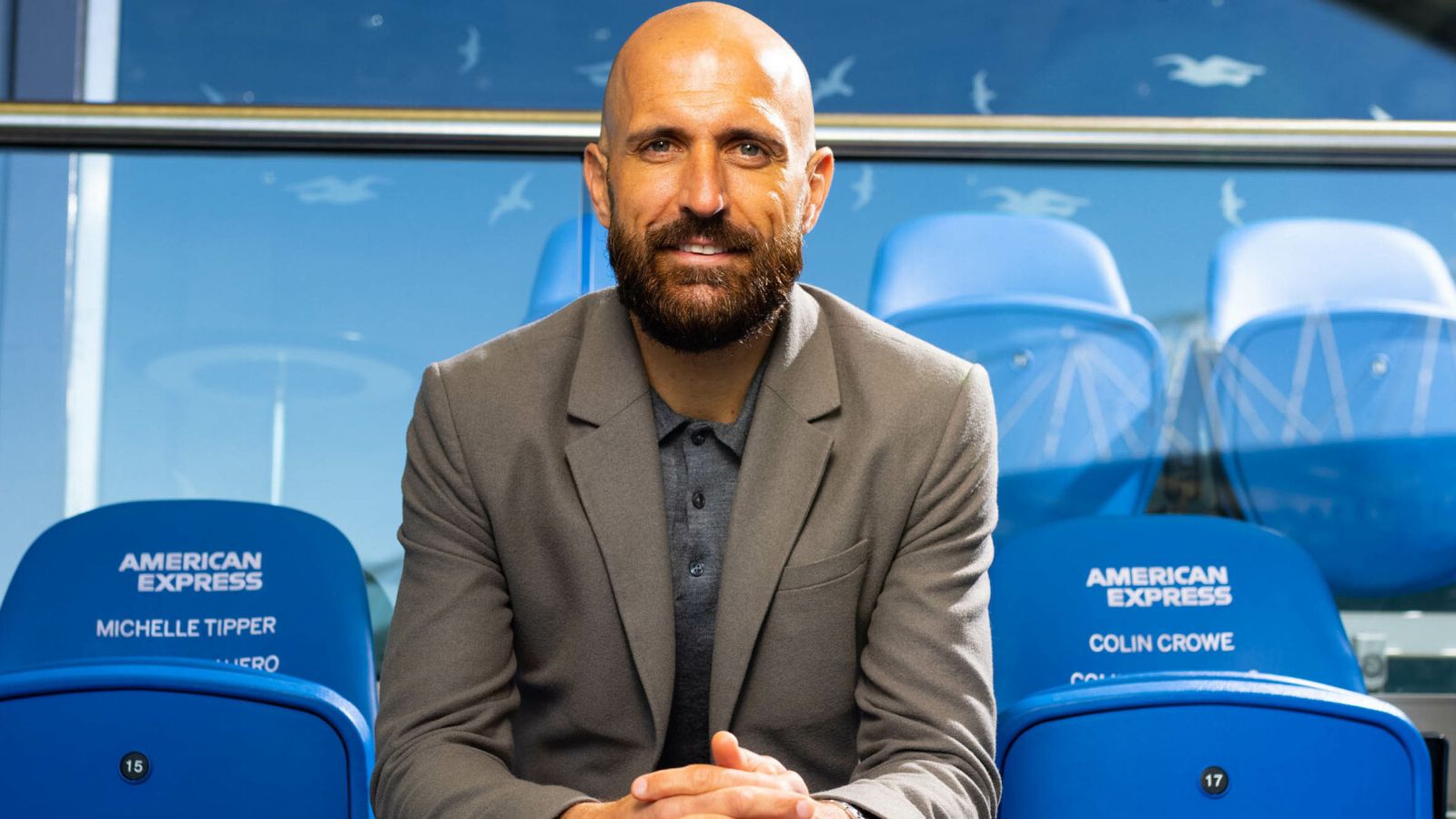 When Pep Guardiola enters the Amex Stadium on Saturday, there will be a recognisable face in the opposition coaching team from an important, if less celebrated, part of the Manchester City manager's history.

Guardiola was proud to represent the Catalonia national team on seven occasions, the last of those caps coming as a substitute in December 2005 during a 1-1 draw against Paraguay.

Sitting alongside him on the bench that day was Bruno Saltor, who went on to become a cult favourite as a player at Brighton, before moving on to Graham Potter's coaching staff as senior player development coach in June 2019.

"My first game for Catalonia was his last game. He was an idol, really," says Bruno. "He came through the academy at Barcelona, so all of us as youngsters from Catalonia looked at him as an example. He was 18 when he first started playing for the first team so when I first met him it was amazing."

Three years after that brief encounter, there was almost a more substantial professional relationship when Guardiola., during his first year as Barcelona manager, made an enquiry for Bruno, who had started to attract attention for some solid performances as a right-back among La Liga's lesser lights.

"I was one of the options, which was special for me," Bruno adds. "Looking back, to have the best manager I have ever seen thinking about me as a player, that was an amazing thing. I was 28 at the time and playing for Almeria. It was my last year there and they were looking for another right-back at Barcelona, but it didn't happen. That's life!"

Instead, Bruno signed for Valencia, where he spent three years at the Mestalla, before he was picked up on a free transfer by then-Championship side Brighton in the summer of 2012. He would go on to make 235 appearances for the Seagulls in seven years, which included a memorable promotion to the Premier League under Chris Hughton.

"Brighton gave me the chance to come to England and immerse myself in the culture," Bruno continues. "They helped me develop not just as a player but also as a coach and a human being. It's been an amazing journey.

"As we've seen for a long time, the Spanish players love coming here for the experience, the intensity and passion of the football. There were a lot of sacrifices, not just from myself but my family as well. If the family doesn't settle or adapt well, then it's very difficult for the footballer.

"We didn't speak any English when we came, we had to adapt to the food, how we communicated with people, even the weather because it was raining all summer. But at the end of the day, it depends on what you want. When you come in with a good attitude it's much easier."

Image: Bruno meets the ten Sussex-based Community Heroes who have been nominated for their significant contribution to the local community, to celebrate the American Express Community Stadium's 10th anniversary (Credit: David Parry/PA Wire)

Bruno quickly became a crowd favourite, with his playing status immortalised when a mural entitled 'El Capitan' was painted on the side of a building in the city's North Laine area to mark their first season in the Premier League.

"Love is so important," he insists. "To feel loved was massive for me and it helped me perform on the pitch. The mural was very special, but I couldn't go walking around there because I felt a bit embarrassed."

Bruno retired from playing at the end of the 2018/19 season at the age of 38, with Hughton also departing after the team endured a long, but ultimately successful, battle against relegation. There was a short period of uncertainty before new manager Graham Potter quickly took the opportunity to add Bruno to his coaching staff.

He has thrived in his role and credits the Brighton manager with giving him the space and trust to develop as a coach in premier League surroundings.

"I never thought I was going to get into coaching this quickly," Bruno says. "The manager's leadership is amazing as he allows every one of us the freedom to contribute whatever knowledge and experience we have. It's so easy to be around the building because his leadership is great.

"Everyone feels free to develop themselves and not have any fear about making mistakes. We can see that on the pitch with the players as well, they are allowed to be brave. Trust is the key characteristic for leadership and he has it."

During matches, the aspiring coach sits in the stands, analysing the play from a higher vantage point than the touchline before joining Potter, assistant head coach, Billy Reid, and first-team coach, Bjorn Hamberg, in the dressing room at the end of each half to offer his own thoughts in a collaborative approach.

Bruno is heavily involved in the planning of training sessions, team strategy and even team selection. Ultimately, he would like this path to take him higher up the coaching ladder, but at this stage of his career, he is hugely committed to an exciting project at Brighton under Potter.

"Let's see where the future takes me and I will just try to be ready for whatever comes up. I'm enjoying a lot what I'm doing now and where I am. This is home for me, working with Graham, Billy, Bjorn and every member of the staff here. It's amazing and I'm learning every day."

And will there be a chance to grab a chat with the manager of the Premier League champions when the two sides meet live on Sky Sports on Saturday?

"We try to say a word. Pep's always really nice with me and really polite, as all his staff are. We are from Catalonia, so we have a good connection."

Bruno was speaking at American Express and Brighton & Hove Albion's official unveiling of 10 'Community Heroes' at the Amex Stadium to celebrate the stadium's ten year anniversary this year.