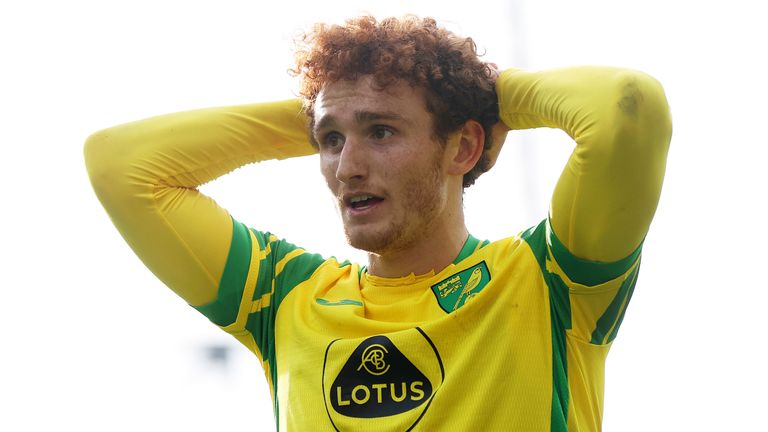 Josh Sargent wasted two great chances as Norwich's search for a first Premier League win of the season continued with a 0-0 draw at home to Brighton.

Brighton should have taken the lead themselves during a first half in which Neal Maupay was harshly denied a penalty when both the referee and VAR overlooked clear contact from Tim Krul, before the goalkeeper pulled off an outstanding fingertip save to push Leandro Trossard's volley onto the bar.

However, Sargent twice let the visitors off the hook either side of the interval. Robert Sanchez's failed attempt to sweep up presented him with an open goal 20 yards out but his shot was tame and Shane Duffy was able to get back to clear. Then, after the restart, a poor first touch from Sargent when through one-on-one allowed Dan Burn to recover.

The Canaries have now failed to hit the net in four games in a row in all competitions and, although they can point to back-to-back Premier League clean sheets for the first time since March 2016, their two points this term leaves them bottom of the table.

As for Brighton - who should have won it when Maupay shot off target from close range late on - they have now drawn their last three in the league but still sit fourth.

Norwich were looking to build on a 0-0 at Burnley before the international break but after Grant Hanley blocked a Trossard shot and Duffy headed off target from a set-piece, they had Krul to thank for a sharp stop to keep out Adam Lallana's drive.

Norwich and Brighton were unchanged from their previous Premier League outings.

The hosts then rode their luck on 23 minutes when Maupay hit the deck after going past Krul in the box but saw his penalty appeal rejected by both on-field referee Peter Bankes and VAR Graham Scott despite the goalkeeper clearly catching him on the ankle.

Image: Neal Maupay goes down after a challenge from Tim Krul, but VAR rejects his protests for a penalty

Krul was then at full stretch to divert a fine Trossard volley onto the bar on 35 minutes after more good link-up play between the Brighton forward and his team-mate Maupay - although Norwich were left wondering why they didn't have a half-time lead themselves.

Image: Josh Sargent missed a great opening in the first half - and another after the break

With just a few minutes of the opening 45 remaining, Sanchez raced out of goal to deal with a through ball but got his clearance all wrong and scuffed the ball to Sargent - but the American was too timid with his finish and gave Duffy time to intercept the ball before it reached the goal.

There was another moment to forget for the forward at the start of the second half, with a poor first touch allowing Burn to clear after Teemu Pukki played him in on goal.

At the other end, Trossard swerved an effort wide after Ozan Kabak gave the ball away, before the welcome return to the Premier League of Tariq Lamptey, following his nine-month hamstring lay-off, was greeted warmly by the travelling support.

Norwich - who are yet to take the lead in the Premier League this season - then saw another big moment fail to go their way, when Pukki lifted the ball into the side-netting rather than over Sanchez and in from six yards, before Burn timed a brilliant tackle on the striker in the box.

Pierre Lees-Melou worked hard to try to make something happen for Norwich but a moment of quality in the final third was lacking from both sides, with a Ben Gibson dig from range as close as the hosts came in the latter stages, while an off-target shot close-in from Maupay rather summed up the poor finishing on show.

Next up for Norwich is Chelsea away next Saturday at 12.30pm, while Brighton host Manchester City next Saturday live on Sky Sports Premier League from 5pm; kick-off 5.30pm.