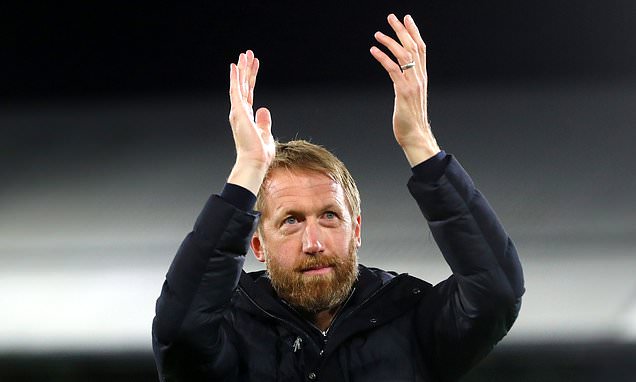 Graham Potter is reportedly one of the people in the frame to succeed Steve Bruce at Newcastle.

The Brighton manager, whose side currently sit just two points off Premier League table-toppers Chelsea, has been widely praised for implementing an attractive brand of football at the AMEX while maintaining a strong defensive unit since taking over from Chris Hughton in May 2019, with results starting to match performances after 15th and 16th-placed finishes in the last two campaigns.

The Magpies have enjoyed a surreal few days since a Saudi-led consortium bought the club from deeply unpopular owner Mike Ashley for more than £300million and the new hierarchy are now thought to be drawing up a list of targets to succeed Bruce, with Potter among those being considered, according to The Sun.

Newcastle - who are now the world's richest club - are currently languishing in the relegation zone and are still searching for their first win this season, with Bruce admitting on the day of the takeover that he fears his time at St James' Park is over, although minority shareholder Amanda Staveley did not publicly confirm that a managerial change would take place after holding a meeting with him.


Former Inter Milan boss Antonio Conte is said to have ruled himself out of the running after being linked with the job, while Paulo Fonseca and Steven Gerrard have also been mentioned in connection with the role.

It could prove difficult to lure Potter away from the South Coast though as he has a contract until 2025 at Brighton, who sit sixth in the table and have the third-best defence in the division after Thomas Tuchel's men and Manchester City.

Bruce has been heavily criticised by large sections of the Toon Army for much of his tenure since replacing Rafael Benitez in the summer of 2019.

The possession-light style of football has bored supporters and an unexpected rich vein of form towards the back end of last season temporarily masked the failings of a side that have just three points to their name this term and have conceded 16 league goals - the joint-highest in the division.

On Tuesday, two days before the takeover was completed, the Newcastle United Supporters Trust (NUST) called on Bruce to resign and want the club to take swift action in dismissing him if he does not heed their request.

A statement read: 'We asked our members if they believed Steve Bruce should resign in the best interests of Newcastle United, and from over 5,000 responses, a resounding 94.3 per cent said yes.

'The board of NUST strongly encourages Newcastle United and manager Steve Bruce to listen to the fans. The discontent among our fanbase is completely justified.

'Fan optimism is at a serious low and Newcastle United is in serious danger of being relegated for a third time under the current owner.'

After hailing the arrival of the new backers, the NUST and many Newcastle supporters will hope a change in the hotseat will soon follow suit.