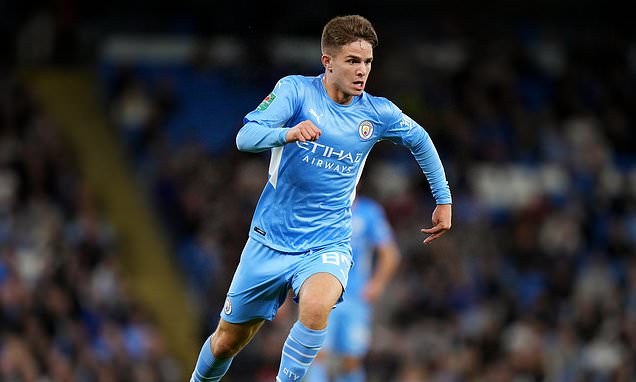 Manchester City have reportedly rejected an £8million bid from Brighton for James McAtee.

The 18-year-old, who operates as an attacking midfielder and has a similar style to Phil Foden, made his first-team debut last month in the 7-1 Carabao Cup win over Wycombe.

While Crystal Palace and West Ham are also interested in the England youth international, the Seagulls have been the most keen to secure his services, according to The Athletic, who revealed that the East Sussex club wanted to convince McAtee of their plans to offer him a quicker route to first-team football than at the Premier League champions, although Pep Guardiola did play him in pre-season and most recently put him on the bench against Paris Saint-Germain in the Champions League.

City are said to be unwilling to sell their prodigy at any price though and despite having several of the best creative players in the world at his disposal, as well as 19-year-old Cole Palmer ahead of him in the pecking order, Pep Guardiola believes McAtee has a future at the Etihad.


McAtee has started the season in stunning style, scoring an incredible 10 goals and producing two assists in just seven Premier League 2 games so far this term as City's unbeaten Under-23s sit top of the table, a point clear of Arsenal.

McAtee is comfortably the division's top scorer - the Gunners' Folarin Balogun is next highest with six goals - and his scintillating form has included hat-tricks in back-to-back matches in the competition against Manchester United and Blackburn Rovers, as well as a brace against Crystal Palace.

McAtee also two goals in a 5-1 win over RB Leipzig's Under-19s in the UEFA Youth League along with a strike against Scunthorpe United's first team in a 3-0 victory for the Under-21s in the EFL Trophy, and has taken that form onto the international stage as well, netting on his debut for the England Under-20s last month in a 6-1 friendly thrashing of Romania.

McAtee started the 1-1 draw against Italy Under-20s on Thursday and is also in line to feature against Romania on Sunday.