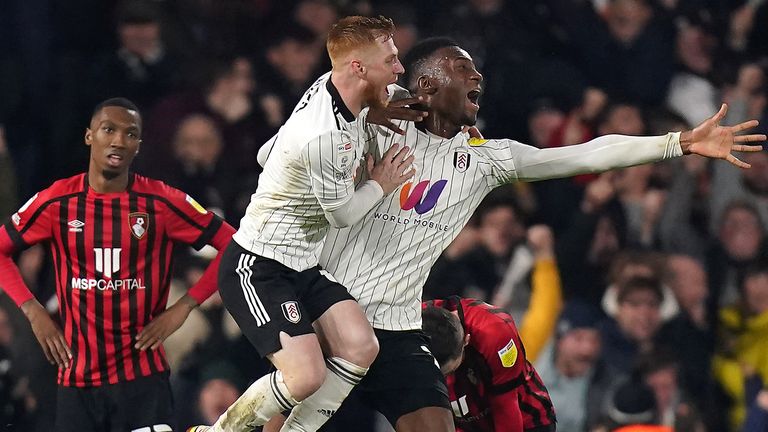 Fulham clung onto top spot in the Sky Bet Championship after coming from behind to hold second-placed Bournemouth to a thrilling 1-1 draw at Craven Cottage.

Marco Silva's side dominated proceedings in the first half and could easily have gone into the dressing room two or three ahead, but it was the visitors who struck first, when Dominic Solanke fired in seconds after the restart (46).

As Fulham looked to recover, they went close with a host of chances, with 21-goal frontman Aleksandar Mitrovic denied on several occasions, but with six minutes to play, Tosin Adarabioyo's header salvaged a point

That equaliser denied Cherries boss Scott Parker a winning return to south west London six months after his departure. With both teams recording a third draw in succession, they remain in first and second spot, separated by just a point.

How a Championship blockbuster ended all square

Despite the fact they had been held to draws by Derby and Preston in the last two games, which had ended a run of seven straight wins, Fulham had climbed above Bournemouth into top spot - and it was immediately clear they were, by no means, prepared to vacate it.

Adam Smith registered the game's first real chance when he hit a low shot at Marek Rodak after a direct run from Emiliano Marcondes, but soon Fulham began to turn the screw and looked particularly threatening on the left, with Neeskens Kebano forcing two strong saves from Cherries goalkeeper Mark Travers.

The experienced Gary Cahill then blocked a shot from Fabio Carvalho after a short pass from Mitrovic, before the hosts had a penalty appeal turned down by referee Tim Robinson, when Harry Wilson was caught by Solanke, though the Welshman's overly theatrical reaction did his cause no favours.

Right on the stroke of half-time, there was a display of sheer bravery from Bournemouth skipper Steve Cook, who put his body on the line twice in a matter of seconds to first deny Mitrovic and then Carvalho seconds later.

Craven Cottage - which is still only populated on three sides, due to construction of the new Riverside Stand - was stunned into silence as the second half got under way. Intricate build-up caught Fulham off-guard, with Solanke able to emphatically fire past Rodak after he was located by a smart ball from Philip Billing.

The introduction of Tom Cairney and Bobby Decordova-Reid undoubtedly gave Fulham the spark they needed to rescue something late on. The former found Mitrovic, who looked despondent as another header failed to hit the back of the net, before threading the ball through for Kebano, who drew Travers from his line to make a crucial save.

Travers was then called into action to deny the Serbian frontman with a stunning one-handed save, but just when it looked as though it wasn't going to be Fulham's day, Cairney whipped in another sumptuous ball, which Adarabioyo glanced home to keep the Cottagers top of the pile.

Man of the match - Steve Cook

Bournemouth's captain Steve Cook put his body on the line twice to stop Fulham from scoring.

Without that stunning double block from the Bournemouth captain, the Cherries may not have even taken so much as a point from the game in the capital. It sent the teams in level at the break, which no doubt gave the visitors the confidence to burst out of the traps afterwards and quieten the home threat that had been so prominent beforehand.

Both sides are back in action at 3pm on Saturday, December 11. Fulham travel to Kenilworth Road to take on Luton, while Bournemouth host Blackburn at the Vitality Stadium.