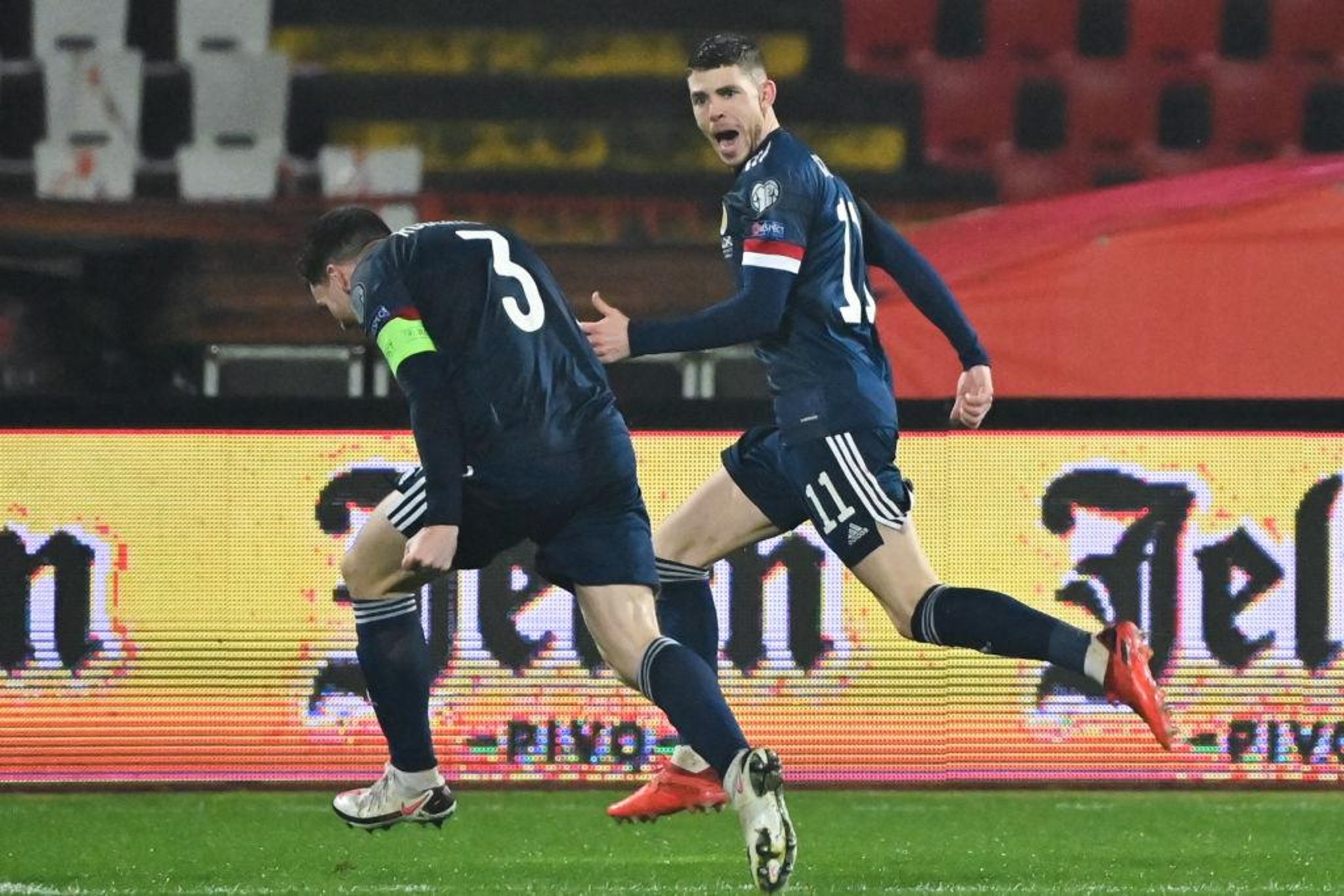 Christie will return to Steve Clarke’s set-up for the Denmark denouement to Group F at Hampden on Monday night after missing Chisinau through suspension.

Famously, the attacker broke down in a live television interview as the emotion of his goal helping end the country’s, eventual, 23-year exile from major finals became too much for him.

That Euro 2020 penalty shoot-out success last year has changed the parameters for judging Clarke’s squad – from within their own confines according to the Bournemouth wide man. He gives the impression the only blubbering in these circles would be the result of Scotland failing to negotiate the two play-off games that stand in their way of a first appearance at the ultimate football tournament since France 98.

Scotland's forward Ryan Christie (L) celebrates after scoring during the Euro 2020 play-off qualification football match between Serbia and Scotland at the Red Star Stadium in Belgrade on November 12, 2020. (Photo by ANDREJ ISAKOVIC/AFP via Getty Images)

“The World Cup is on everyone's mind now,” Christie said. “The first thing we said when we met up for the Euros was that we wanted to do ourselves proud. But we also said we didn't want to be a one-hit wonder. We wanted to make that the benchmark and make it a regular thing that we qualify for tournaments. Getting to the World Cup is that step harder but with the group we have, and how well we are playing, we feel we can definitely achieve it. We have a young vibe in this team and everyone is desperate to qualify again.”

Everything has changed for Christie since his summer switch from Celtic to the English south coast. The 26-year-old’s desire to try something different was questioned when he opted to head to the Championship. However, with Bournemouth top of the table and Christie an integral performer for Scott Parker’s men, the Invernessian looks headed to the promised land of the English Premier League.

Five assists for his new club place him among the best in the set-up for such returns. He despairs, though, that he has yet to open his goal account. “I’m just desperate for my first,” he said. “Honestly, I couldn’t score in a barrel of anything at the minute. But as long as I am getting a few assists here and there I will take that for now.”

Deployed wide right at club level, his international opportunities could be limited in the immediate term. Like Christie, Lyndon Dykes is also available following a ban for the group closer with Danes - which Scotland need to win to guarantees a home play-off semi-final. It raises the possibility of Clarke opting for Che Adams and Dykes in a strikeforce that appears to have become his default.

“The manager has been playing the system for so long now that we all know how we play,” he said. “There are a few boys, myself included, playing as a winger for their clubs. But we have been playing with Scotland for so long now we know we have to slightly change position when we come away. Over the course of my career I have been quite versatile. I have always moved about so I hope that can suit me for the international set-up going forward.”