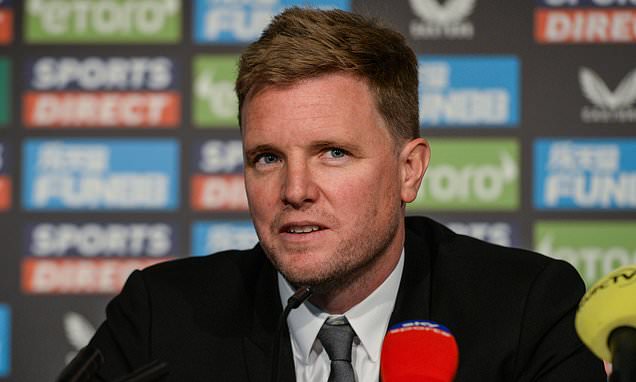 Eddie Howe has admitted for the first time that he backed out of the Celtic job because he wasn’t able to bring his backroom staff to Glasgow.

But the newly-appointed Newcastle United manager claimed that he did not perform a last-minute U-turn — and says he was always honest in his dealings with the Parkhead club.

Asked about his apparent late change of heart in rejecting the Hoops after they seemed on the brink of appointing him after weeks of patient pursuit, the former Bournemouth head coach declared: ‘The problem is that I didn’t change my mind at the last minute.

‘I have not spoken publicly on it because there have been a lot of things said that have been totally untrue.


‘I couldn’t get my backroom team together to go to Celtic for a host of different reasons.

‘And I didn’t want to take the job of such size, knowing the job needing to be done, on my own. I knew what was needed.

‘So there was no change of mind, I was open and honest with everyone connected.’

It was late May when Celtic, who had been hoping to appoint Howe within a matter of days, announced that he wouldn’t be taking over as head coach for ‘reasons outwith both his and our control’.

Howe added yesterday: ‘Celtic were absolutely brilliant and I was open and honest all the way through. No problems with Celtic whatsoever.’

Sportsmail revealed yesterday that, despite pulling out of the Scotland squad injured, Ryan Fraser was back training with Newcastle on Tuesday.

When asked about the winger — who played for him at Bournemouth — Howe kept his cards close to his chest.

He said of their reunion at St James’ Park: ‘Me and Ryan always had a very strong relationship.

‘You’ve got to remember I took Ryan from Aberdeen into League One and we worked together so closely to try and get the best out of him and make him into a Premier League player. He was absolutely brilliant.

‘He really took on board what we were trying to do with him. He worked incredibly hard and he got all the rewards.

‘I was disappointed for us with the ending at Bournemouth. That’s in the past.

‘The future’s the future and I’m delighted to be working with him again.’