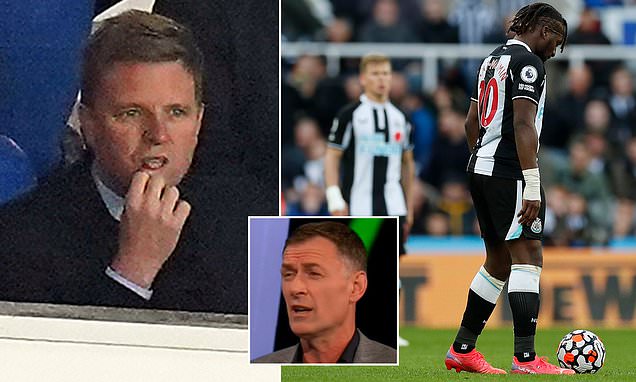 Chris Sutton has raised some questions over Newcastle's decision to appoint Eddie Howe as their new manager.

The Saudi-led club turned to Howe after they failed in their pursuit of Villarreal boss Unai Emery.

Sutton believes Newcastle didn't handle their manager search well and claimed that Bournemouth 'lost' their way towards the end of Howe's tenure at the club.

Sutton said on the Monday Night Club: 'He clearly wasn't first choice. I don't think Newcastle have handled this situation overly well with that leaked proposal. And then Unai Emery essentially turning them down. They had to get someone in.


'And look I like Eddie Howe, I think he's a smart guy but he's got one hell of a job on.

'I think January is going to be absolutely key. I think if you look at his managerial record, the way that his team played at Bournemouth I thought they were a breath of fresh air, he lost it in the end.

'His recruitment the last couple of years at Bournemouth wasn't that impressive. He's got to get his recruitment right in January, but it's about staying up, isn't it?

'And it will be interesting, the brand of football that Newcastle play under Eddie, especially early on, because do Newcastle have the players where they can really play an expensive game? I'm not so sure they do.'

Howe will be walking into a tough job with the new richest club in world football currently bottom of the Premier League table and without a win to their name.

Newcastle are expected to be busy in the January transfer window as they look to keep themselves up in the top-flight so they can continue to build next summer.

Howe, who has signed a contract until the summer of 2024, has not been in management since he left Bournemouth in August 2020 following relegation.

The new manager watched Newcastle's 1-1 draw at Brighton on Saturday from the stands.