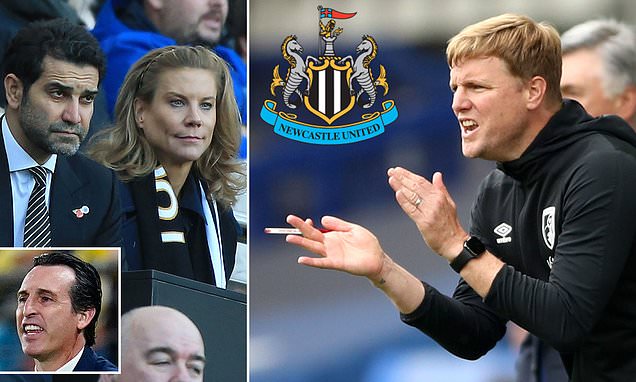 Newcastle's new Saudi-led regime have finally appointed their first manager, with Eddie Howe having signed a two-and-a-half-year deal to take over at St James' Park.

The 43-year-old had been out of a job since leaving Bournemouth following their relegation from the Premier League two seasons ago, but after talks progressed last week and he watched their draw at Brighton from the stands, Howe was officially confirmed in the post on Monday.

'It is a great honour to become head coach of a club with the stature and history of Newcastle United. It is a very proud day for me and my family,' Howe said.


'This is a wonderful opportunity, but there is also a lot of work ahead of us and I am eager to get onto the training ground to start working with the players.

Howe is perhaps a surprising choice to lead what is now the richest club in the world following the recent £305million takeover, with the new owners enjoying the financial might of Saudi Arabia's Public Investment Fund, which is worth over £300billion. The club will be able to spend some of those funds for the first time in January amid a fierce battle against relegation.

His name did not have the backing of all members close to the new consortium when first floated four weeks ago, with Unai Emery becoming the clearly favoured candidate - but the Spaniard rejected an approach and has stayed on at Villarreal.

Amanda Staveley, however, was always keen to speak with Howe and he was interviewed two weeks ago. Some of his former Bournemouth players in the Newcastle dressing-room - which include Callum Wilson, Ryan Fraser and Matt Ritchie - had already communicated their support for their old boss to Staveley.

Sportsmail understands Howe would also have been the man the previous ownership turned to had Steve Bruce been sacked on their watch. Lee Charnley - the managing director who remains at the club - is thought to have supported Howe's cause in light of the takeover.

Newcastle's new Saudi owners, fronted by Amanda Staveley (right) with her husband Mehrdad Ghodoussi, have made their first managerial appointment since sealing a £305m takeover

After watching on at Brighton's Amex Stadium on Saturday, Howe will now work towards his first game in charge, a home game against Brentford on November 20 following the international break.

Interim boss Graeme Jones believes that while Howe is inheriting a side winless in the league and sat 19th, five points from safety, there is a togetherness that he can build on.

'I think he'll inherit a team that off the ball was prepared and capable of going and pressing a brilliant Brighton team with pressing football and keeping high up the pitch.

'So I think he'll have seen that it's improved from Crystal Palace.'

Howe spent 11 years with Bournemouth across two separate spells, the second one lasting eight seasons, and pulled off a huge achievement to take them from League One through to the Premier League with limited resources.

He began his first spell with the club at the foot of League 2 and fought off a points deduction to maintain their Football League status back in 2009.

Howe had looked set for a return to management with Celtic earlier this year before the Scottish side appointed Ange Postecoglou after negotiations broke down.

New Newcastle manager Howe (second from right, bottom row) was pictured in the crowd at the club's away match against Brighton at the Amex Stadium on Saturday night

He sat next to Staveley (second left), whose consortium bought out Mike Ashley in October

Howe thought he had missed out on the role when Emery emerged as the preferred candidate last weekend.

The Spaniard's advisers - including his brother, Igor - were in the UK last week in anticipation of his unveiling ahead of Newcastle's trip to Brighton.

Howe also impressed during his interview by outlining his vision for immediate improvement, with Newcastle winless in the Premier League.

Despite ending in relegation, Howe took Bournemouth from League Two to Premier League

It is thought he shared the view of the hierarchy that fitness levels and organisation could be better, and that the current squad is performing way below its capabilities after a 11-match winless start.

Howe is happy to work alongside current interim boss Jones and is expected to add coaches Stephen Perches, Jason Tindall and Simon Weatherstone to his backroom staff at St James'.

Newcastle face a defining run in their season with Brentford, Norwich and Burnley all in the next four.

Howe has the support of some of his former Bournemouth players who are now at Newcastle, including star striker Callum Wilson (left, with Ciaran Clark and Jamaal Lascelles in training)