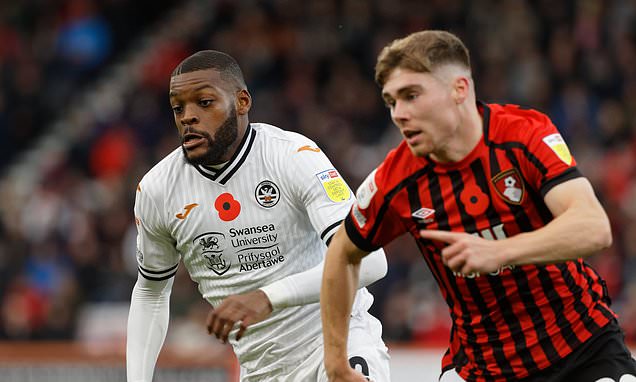 Scott Parker heaped praise on ‘animal’ Leif Davis after the youngster stepped in from the cold to help Bournemouth crush Swansea and maintain their two-point lead at the Championship summit.

Left back Davis, 21, had endured a disrupted campaign with one start and three substitute appearances since joining on loan from Leeds United, but delivered an all-action display and assist as his side bounced back immediately from their first League defeat at home to Preston in midweek.

With Dominic Solanke — only just 24 — scoring in either half, 21-year-old winger Jaidon Anthony netting twice late on and keeper Mark Travers, 22, recording a ninth clean sheet from 16 games, Parker’s faith in youth is paying handsome dividends.

On Davis’s performance, boss Parker said: ‘I was pleased for him. He’s had to wait for his opportunity. He’s struggled since coming in for many reasons. He’s had injury and illness so it’s been a bit of a stuttering start.


‘He’s also a young player and he’s not got vast experience in the arena so we’ve had to work and help him through that.

‘What pleased me the most is that he started slowly in that sense today, then he just grew into the game. He was an animal really and got an assist, so I was pleased for him.’

Davis himself stepped into the side in place of injured 21-year-old Jordan Zemura, who had enjoyed a sensational start to the season, and the side who saw off the Swans also featured 23-year-old captain Lloyd Kelly at centre back and youth-team graduate Gavin Kilkenny, 21, in midfield. Marshalled by the experience of Gary Cahill, 35, in defence, this is a team who appear to be improving by the week in all areas.

In a fiery encounter at the Vitality Stadium, the Cherries showed resilience to overcome a dominant opening spell from Swansea, who slip to 12th and three points off the play-offs.

When the opener came, it all appeared so simple. Anthony’s ball sent Philip Billing clear and his low first-time cross found Solanke in the box.

After a tricky opening half, Davis then came to the fore as the hosts put the game to bed almost immediately after the break. He raced on to another Anthony through-ball and his cross was acrobatically dispatched by the lethal Solanke.

Aggressive pressing from Bournemouth made it difficult for Swansea to build any of their trademark passing moves, on occasion flirting with danger in playing out from the back.

That led to the third goal as Matt Grimes’ mislaid pass was seized on by Ryan Christie, who nutmegged Kyle Naughton and charged in on goal.

When his effort was parried by Ben Hamer, Anthony planted a header back beyond the keeper.

In the final minute, Swansea were again caught in possession inside their own area and sub Jamal Lowe slid the ball across for Anthony to slot home with the last kick of the game.