Bournemouth 4-0 Swansea: Dom Solanke and Jaidon Anthony strike twice each as Cherries get back on track
Sky Sports 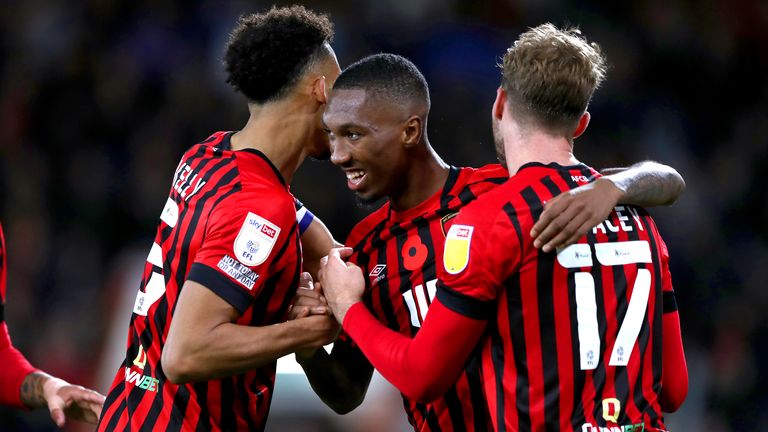 The Cherries took the visitors apart in the second half after Swansea had started brightly at The Vitality Stadium.

It keeps Scott Parker's side top of the Sky Bet Championship and well-placed for a return to the Premier League with more than a third of the season played.

Bournemouth came into the game having finally surrendered a 16-match unbeaten start to the season with a 2-1 defeat at home to Preston on Wednesday.

Nevertheless, they still began the day with a two-point cushion over Fulham at the top of the table and plenty of reasons for optimism.

There were some initial signs of rust, with Swansea seeing lots of the ball early on.

The visitors had strong claims for a penalty waved away by referee Tony Harrington after Ethan Laird looked to have been clipped just inside the area by Leif Davis.

It was a contest very easy on the eye with both teams patient in their possession-based approaches and Olivier Ntcham saw his low shot saved by Mark Travers at the end of a flowing team move from the Swans.

Ntcham was proving a problem and he set up a shooting opportunity for Dutch forward Joel Piroe on the edge of the area. He went for the far corner and saw his effort turned away by Travers.

But midway through the half, Bournemouth led through Solanke in what was their first meaningful attack.

Anthony fed Philip Billing down the left, with Swansea appealing for offside. The flag stayed down and Billing slid the ball across for Solanke to score his 12th goal of the season.

The manner of the goal gave a new edge to the game and a huge brawl ensued after Billing and Flynn Downes came together. Both players received a booking after Parker had entered the field to try and play peacemaker.

The game was finely poised at half-time but Bournemouth scored a crucial second just four minutes into the second half with Solanke on target once more.

Anthony was again involved, playing in the overlapping Davis and he hoisted the ball over for Solanke to execute a brilliant acrobatic volley at the near post.

Swansea were losing heart and soon gifted their hosts a third goal to effectively end the contest.

Captain Matt Grimes carelessly gave the ball away to Ryan Christie whose shot was saved by Ben Hamer's legs before Anthony headed in the rebound.

From then on, it was just a question of how many Bournemouth would score. Anthony cut in and swerved a shot to the far post which Hamer did well to push to safety.

But in the final seconds, things did get worse for Martin's side as substitute Jamal Lowe squared the ball across the area for Anthony to bury a low strike into the corner.

Bournemouth's Scott Parker: "I thought it was a big performance from us. We were brilliant overall - everything about us really. They caused us a few problems early on and that was probably down to me. They were causing us a bit of a problem tactically that we had to fix and we did that.

"I'm reluctant to say a reaction to Wednesday because we didn't lose it through a lack of passion and desire, we lost it because of a few small details."

Swansea's Russell Martin: "Ethan gets fouled in the box. The official admits there's contact, he just didn't think there was enough. I think we started the game brilliantly. It's really disappointing we don't score when we're on top. We have a long way to go and a lot to learn. We've improved a lot and we need to continue to improve.

"The game became very open and at 2-0, we were chasing it a little bit. I'm hurt that we lost 4-0, I really am. I don't think the guys deserved that. I think these guys (Bournemouth) had seven weeks of preparation together before the season and we haven't had that fortune."