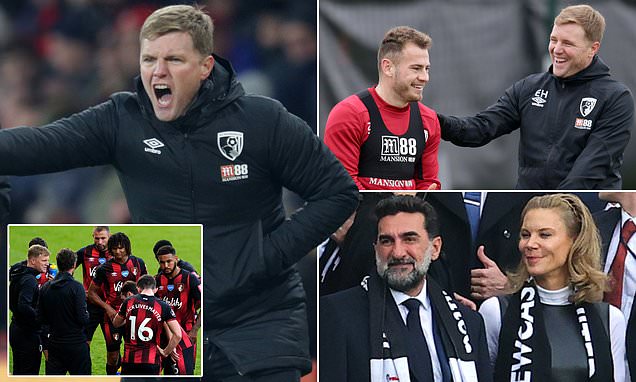 After over a year out the game, Eddie Howe finally seems set to jump back onto the football roller-coaster with Newcastle - a job that could be a ticket to the very top or one that takes him back into the Championship.

Having embarrassingly failed to land Unai Emery, Newcastle's new Saudi-backed ownership look to be returning to Howe cap in hand, with the former Bournemouth manager and the rest of the footballing world only too aware he is their second choice.

Should Howe care? Perhaps not. For all the chaos of Newcastle's manager search, the Magpies job should remain a tantalising prospect for a manager, especially a man like Howe.

The saga was an embarrassment for Newcastle's owners, who have now turned to Howe

Granted, Newcastle have had a dire start to the campaign. They are 19th, already six points from safety after 10 games of the season. There is work, hard work, to do for whoever takes the reins.


But Howe may well look at the players and see roots for recovery, something he can get to work with right away. There are three former Bournemouth men in the Newcastle fold in Callum Wilson, Matt Ritchie and Ryan Fraser who are all familiar with his methods.

It is on the training ground where Howe does his best work and his attacking style of play is something Newcastle supporters will promptly warm to. At Bournemouth, he also became known for developing talent via his coaching methods - players such as Nathan Ake and Tyrone Mings are two names who can attest to that.

He will back himself to kick-start Newcastle at once and with a transfer window on the horizon, a vision of leading the club up the table before beginning a proper rebuild in the summer will seem a thrilling prospect for the 43-year-old.

Indeed, building a club is something Howe has immense pedigree for. He orchestrated a stunning surge through the footballing pyramid at Bournemouth, from League Two to the Premier League and even though they had been relegated when he stepped back, the south-coast club was transformed by Howe and is a completely different animal to the one he first took over.

Despite ending in relegation, Howe took Bournemouth from League Two to Premier League

Howe has worked with a number of Newcastle's players before, including Ryan Fraser

Howe's rein at Bournemouth was bisected by a short spell at Burnley in 2011, stepping aside after one full season for personal reasons. But when he returned to Bournemouth in 2012, he picked up where he left off with the club in League One.

He knows how to build, he knows how to improve what he has and right now, for all the money Newcastle have, that nous is priceless.

Newcastle need to get to January in the best possible situation. The footballing world will be watching how Newcastle identify their targets and execute deals, particularly in light of the Emery saga.

One dent in Howe's record is the amount of money he spent on duds at Bournemouth and that is something that, if it continues at Newcastle, could risk their Premier League status if results haven't improved by then.

Eventually, the amount of under-performing players brought in on big money derailed Bournemouth and saw them lose their Premier League status.

Dominic Solanke might be firing them in for the Cherries in the Championship but managed just three Premier League goals the year they went down - which isn't good enough for a £19m signing.

At Bournemouth, Howe spent big on players like Dominic Solanke (left)who didn't cut it in the Premier League - it's something that cannot happen again with Newcastle

If Howe has learned from his errors at Bournemouth, he could be a top Newcastle appointment

Jefferson Lerma hasn't ever justified a £25m fee while the £15m on Jordon Ibe was exciting at the time but didn't work out for unfortunate reasons. £15m was also spent on midfielders Philip Billing and Arnaut Danjuma, the latter of whom joined Emery's Villarreal in August for £21m.

Reports have stated Newcastle will have a budget of around £50m in January which, in today's world, isn't an obscene amount of cash. It will need to be spent astutely, on players who can hit the ground running.

But after a year out, Howe will be eager to prove he has not only learned from his mistakes but honed the skills that have made him such a success already.

And if he has, his appointment could galvanise Newcastle from the bottom up.