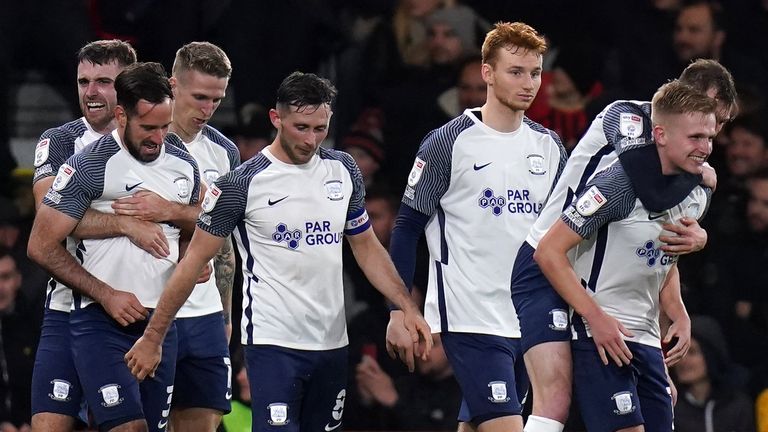 Ben Whiteman was also on target with Philip Billing replying for the Cherries as Preston picked up their first away win of the campaign.

Bournemouth were without the injured Jordan Zemura so Wales defender Chris Mepham was pressed into action as a makeshift left-back.

Jamal Lowe and Ben Pearson also came into the side at the expense of Gavin Kilkenny and Jaidon Anthony as the Cherries started the game with the team that ended Saturday's 2-0 win at Reading.

The Cherries dictated the opening half an hour without managing to trouble Preston goalkeeper Daniel Iversen.

Billing's 13th-minute free-kick after Dominic Solanke had been fouled which the Denmark midfielder curled tamely wide was as close as they came to turning their territorial domination into a goal.

Bauer did well to get there ahead of Solanke after Columbian international Jefferson Lerma looked to have played him through on Iversen's goal.

Preston started the evening 19 points below their table-topping hosts but came close to opening the scoring 11 minutes before half-time.

Tom Barkhuizen used his pace to burst beyond Mepham on the right wing before shooting into the side-netting from an acute angle.

Barkhuizen carved another chance for the visitors soon after, recycling a corner back into the penalty area for Josh Earl to volley goalwards, drawing a brave block from defender Lloyd Kelly.

Solanke was denied by a vital last-ditch tackle from nemesis Bauer when he would have been one-on-one with Iversen a minute after the restart.

Preston then showed their quality at the other end to break the deadlock courtesy of Whiteman's 52nd-minute opener.

Barkhuizen raced into space on the right flank before picking out Whiteman 12 yards out and the midfielder expertly picked out the top left corner with a pinpoint strike.

Eight minutes later and Just as Bournemouth boss Parker was preparing to go to his substitutes' bench, the Cherries equalised through Billing.

Jack Stacey's low right-wing cross was only half-cleared by Sean Maguire and Billing reacted quickly to turn onto the loose ball and fire into the bottom right corner.

Bournemouth were almost gifted the lead when Andy Hughes sliced a clearance across the face of his own goal.

Mepham forced a smart save from Iversen with a 20-yard effort as the hosts pushed for a late winner while Solanke also headed wide from Ryan Christie's free-kick.

But it was Preston who scored again in the 78th minute when McCann swept home from Emil Riss' left-wing cross.

Iversen made a brilliant double save from Stacey and Jamal Lowe to stop Bournemouth equalising for a second time in the 85th minute.