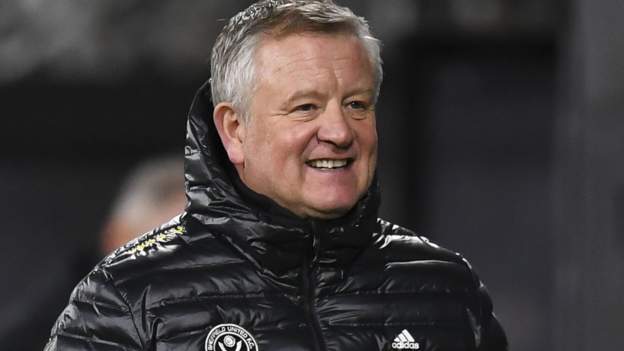 Chris Wilder has won promotions with his previous three clubs, including taking Sheffield United up to the Premier League in 2019

New Middlesbrough boss Chris Wilder has said his ambition is to get the club back to the Premier League.

"We will all do whatever we can to get back to the Premier League," he said.

"I've got to climb another mountain and that's what it's all about. I wouldn't be sat here if I didn't think I could do that."

He added: "It's got to be our ambition to get back to the Premier League. We all want to be playing the big guns and that has got to be my ambition and the staff's as well.

"The supporters want the big names to be coming here and seeing their side take them on. It's a long way off at the moment, but we dare to dream.

"We shouldn't be scared trying to repeat what went on here in the 90s. What has gone on before shouldn't hold us back. There is an opportunity to make history. As long as we're together, I'm sure we can push on."

Middlesbrough spent 11 consecutive years in the Premier League between 1998 and 2009 but since then have only had one season in the top flight, in 2016-17.

They are 14th in the Championship after 17 matches, but are just four points off the top six and Wilder believes the race for a place in the play-offs will go down to the final day this season.

He led Sheffield United from League One to the top tier and guided them to a ninth-placed finish in their first season back at that level in 2019-20.

However, they struggled last season and the former Oxford United and Northampton Town manager departed in March of this year with the Blades bottom of the league.

He said he has had other approaches to return to the game during his time off, but that he had wanted to wait for the right opportunity.

"I wanted a club that was aligned to my values and principles as well as the stature given what I have achieved. I was delighted when I got the call from (owner) Steve Gibson," he said.

"It fit straight away. I know the character and the people in the area who support it. The relationship between owner and manager is so important. The chairman lets you get on and manage.

"I've enjoyed my media work but this (management) is me. I've been in it for 20 years and this was my first break. I've missed it enormously.

"I'm delighted Middlesbrough have approached me and it's up to me to produce the goods. Hopefully I can give back what they've given me."