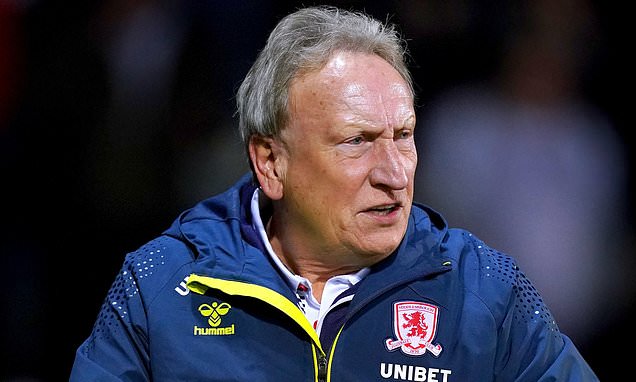 Neil Warnock is facing a fight to save his job at Middlesbrough - with sources suggesting that defeat on Saturday is likely to seal his fate.

On Tuesday night the veteran Boro boss broke the record when he took charge of his 1,602nd game in league management. However, the 3-1 defeat at Luton Town has pushed Warnock to the brink.

Insiders say that a loss at the hands of promotion-chasing West Bromwich Albion this afternoon is likely to prompt chairman Steve Gibson to show the 72-year-old the door.

Fans chanted for Warnock, who took over from Jonathan Woodgate in June 2020, to be sacked following a defeat at Reading in September and at Hull last month but three wins quietened those calls.


However, the loss at Kenilworth Road thanks to three goals in five minutes was the club's second in a row and has left them in 14th place in the Championship.

While Boro go into the match at the Hawthorns three points outside the play-offs, Sportsmail understands that defeat may well signal the end of the road for Warnock who, at eight, has won more promotions than any manager in the English game.

After succeeding Woodgate he guided the club away from the relegation. Last season, they finished 10th.

Warnock entered the EFL as manager of Scarborough in 1987 and has since taken charge at 14 clubs, including boyhood side Sheffield United.

'I never set out to do anything like that,' Warnock said after breaking the record. 'I can't see something like this being beaten. In another 16-17 games, it will be the most Football League games. Hopefully I can keep my job a bit longer.'