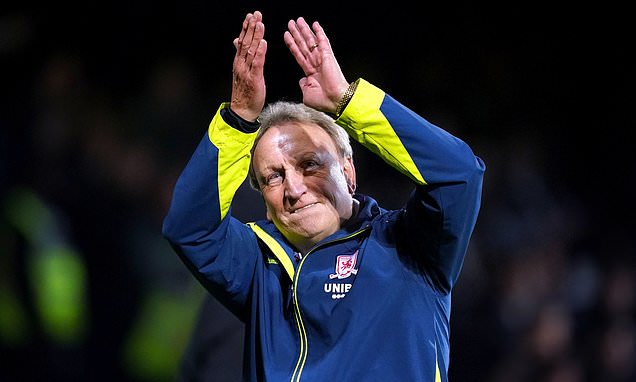 Neil Warnock is now the owner of one of English football's most decorated records, after taking charge of more matches than any other manager.

The veteran boss, 72, reached a landmark total during Middlesbrough's recent away fixture against Luton Town at Kenilworth Road.

Boro came away from the match having suffered a 3-1 defeat, though Warnock was in a buoyant mood after featuring for the 1,602nd time as a manager.

Since he first entered the EFL as a manager with Scarborough in 1987, Warnock has taken charge at 14 different clubs, from Torquay, to QPR, to boyhood club Sheffield United and won promotion on a record eight occasions.


Following the match, Warnock told Sky Sports: 'I never set out to do anything like that.

'I can't see something like this being beaten. In another 16-17 games, it will be the most Football League games. Hopefully I can keep my job a bit longer.

'Simon Jordan got me out of retirement at Palace because I thought I was going to be finished after Sheffield United.

'He told me to have a couple of months and help him out and it's things like that that have kept me in it. Rotherham United was special. They got me back in after I'd called it a day then.

'Those circumstances and having those 16 games at Rotherham really whetted my appetite for the Cardiff carry on. You can't put your finger on just one thing that keeps you coming back.'

Warnock was also quick to acknowledge that his style does differ from younger managers in the game, for better or for worse. Nonetheless he remains content with his approach, ahead of his 73rd birthday next month.

Warnock added: 'Younger managers get a bit brainwashed with clipboards and qualifications and forget the little things in life like the humour.

'You can't give them a course in humour. I have always enjoyed that part, and meeting the away fans, the banter and getting some stick.

'I couldn't have done as many games without humour.