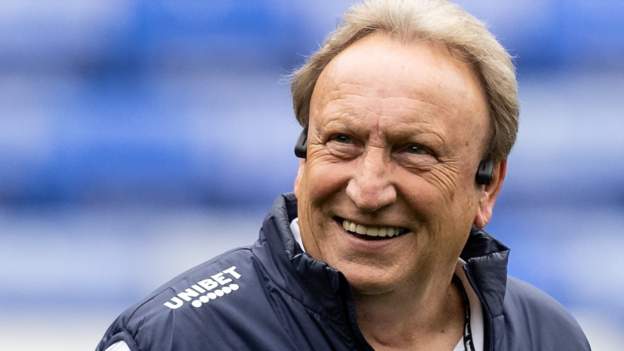 Neil Warnock says he would have walked away from football but for Steve Gibson's decision to appoint him as Middlesbrough boss, as he prepares to manage a record-breaking 1,602nd match.

He will overtake Dario Gradi's record of most games managing English league clubs in Tuesday's trip to Luton.

"I didn't think I would. I owe a lot to Steve Gibson, because I wouldn't have carried on in football if he hadn't made that phone call.

"I had no idea about the record until two weeks ago, and someone has told me I've got another record coming up in about 14 or 15 league games.

"I've just got to keep my job for a few months and do the best I can."

Neil Warnock has won eight promotions during his career, including back-to-back play-offs with Notts County

Warnock has become something of a promotion specialist during his career, enjoying end-of-season success on eight occasions.

His achievements stretch from the Conference title with Scarborough in 1987, back-to-back Wembley play-off wins with Notts County, through to taking Cardiff into the Premier League - matching his work with Notts County, boyhood team Sheffield United, and QPR.

Having steered Boro to safety in his initial "firefighting" stint as manager, Warnock led Boro to a mid-table position last season and they are in a similar position this campaign.

Saturday's 2-0 home defeat by Birmingham came on the back of three wins, but the Sheffield-born veteran still loves the buzz of matchday and the pressures and strains of the job.

"I enjoy it, I've enjoyed it here," he added. "I know the majority of fans know how difficult it's been and they're right with me, but then obviously you get the others who can't wait for me to go.

"I'm afraid that's life in football really, you've just got to let it go in and go out and just do your best and that's all I do.

"That's why I've lasted so long, because I put more smiles on people's faces than gloomy looks. That's how I see life and how I see football.